Learning to do something 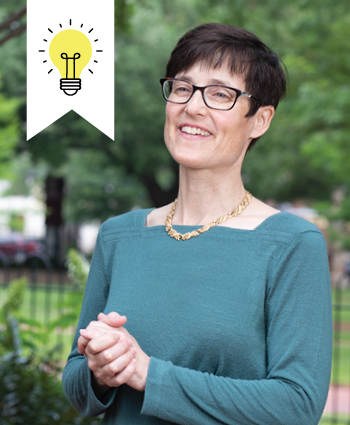 As a hydrogeology professor and groundwater researcher, Alicia Wilson knows the facts about geology and environmental science. But she also understands that presenting a collection of facts isn’t enough for students in her classroom.

Students who pursue careers in geology and environmental science, for example, need to understand the workings of contaminated groundwater. “What you need to be able to do is start with basic observations and figure out which way the water is going, how fast it’s moving and where you can install a well to capture that contamination,” Wilson says. “You need a lot of concepts and facts, but what you want is to be able to do something.”

In her numerical modeling class, students don’t rely on other people’s numerical models; they write their own models to answer questions about groundwater flow and transport.

“So, we really know what’s under the hood. Once you’ve written your own model, you can use somebody else’s model or learn any model because you know what has to go into it,” Wilson says. “We can give you a framework so you can handle any model instead of me just teaching you one.”

Wilson started out as a physics major but an elective geology course in her freshman year planted a seed. As she got into upper level math and physics classes, geology became more interesting.

“I was that kid who would take math classes as an elective. So, I wanted to be able to do geology and use my math. Hydrogeology is mathematically based,” she says. “It also appeals to my theoretical side. A lot of people like stuff they can touch. I like that you can’t see groundwater that easily, but I have the math to be able to visualize it. I can draw what’s happening because I’ve done the math. I can make something that’s kind of invisible tangible to people.”

Making the invisible come alive for students is important for her, too. While she says she is driven by her interest in research, she also loves her time in the classroom.

For many years, Wilson taught ENVR 101, an introduction to the environment course with about 300 students, almost all of them non-environmental science majors. But even in a large classroom setting, she made it a point to get to know her students.

“If you can catch their attention and make it interesting, then you’ve done them a service,” she says. “I love to get conversations started in those rooms. It’s so easy for a big lecture like that to be me spewing facts, but the way to build connections with students is to talk with them. You can’t talk to 300 at once, but you can ask questions about them. It makes it personal. I work hard to make those connections.”

And those connections with students are beneficial for her, too.

“The more I teach, the more I feel like I understand a broader range of people. Every year I become a better person, just by learning about other people’s stories. Students really reinforce your faith in humans.”