McCutchen: A Gamecock Family Name Built on Hospitality and Scholarship

As a little girl, she played on the Horseshoe, listened to her grandfather share wisdom with students in his on-campus home, and sat on the knee of the president of the University of South Carolina. As a young woman, she became the first female student in the UofSC engineering school. As an adult, she is a respected leader who has succeeded as a writer and editor and as a politician who has helped shape the future of higher education in her community. Through it all, Lilla McCutchen Richards has been, and is still, a Gamecock.

Richards spent many of her childhood summers on campus, visiting her grandparents, George McCutchen and Lilla Johnstone McCutchen who lived in what is now known as the McCutchen House, located on South Carolina’s historic Horseshoe.

The McCutchens lived in the house from 1915 until 1945 during George McCutchen’s 48-year tenure as an economics professor at South Carolina. At that time, professors were encouraged to live on campus and housing was provided for them until after World War II. The house was later named in honor of George McCutchen and is still a cornerstone of the university community, serving as an applied learning laboratory for hospitality management students, including a full-service restaurant that is open to the public. 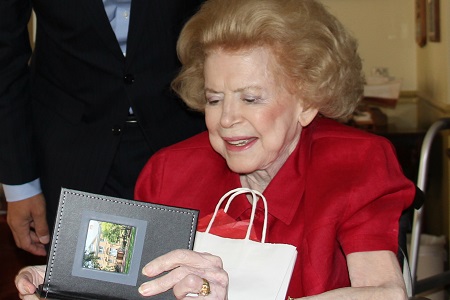 Lilla McCutchen Richards looks through a UofSC photo album presented to her by HRSM Dean Haemoon Oh for her 80th birthday.

Richards’ father and uncles, brought up on campus, had their own ways of making McCutchen House home. As budding engineers, they built their own cars and motorcycles in the basement of the house, using scrap parts found in junkyards or acquired from what is now Shaw Air Force Base. They also raised small livestock just steps from the Horseshoe.

"Uncle Wilmot McCutchen raised bunnies as pets, but when they were old enough, they became much-needed meat for the family during the Great Depression. Years later, when the exterior of the home was being restored to its 1813 appearance, bulldozers kept sinking in the back yard. We knew why. It was the rabbit warrens."

For young Lilla, the Horseshoe was her playground and the faculty was like her extended family. She smiles at memories of climbing the Maxcy Monument and visiting the man then leading the university, President J. Rion McKissick.

“We adored President McKissick,” Richards says. “He and his wife didn't have any children or grandchildren, so they sort of considered us their grandchildren. He would come back from the office in the late afternoon, the weight of the university on his shoulders. He'd call my grandmother and she'd let us come over, and he's the only man in my whole life I ever remember dandling me on his knee. We really seemed to cheer him up."

Home for Richards’ grandparents was a house not yet called McCutchen and shared with another professor and his family. The transition to the student-run restaurant it is today lay far in the future, but already it was known as a place where visitors were always welcome.

"My most vivid memories of Papa McCutchen are of him leaning back in an old black upholstered easy chair, smoking a pipe in the late afternoon, students sitting on chairs or on the floor around him, asking questions and paying close attention to the answers, and I was hiding on the stairway listening," she says. "The signal that the seminar or Socratic session was ending, when it was starting to get dark or Papa was sounding tired or the tall clock in the hall was starting to strike, was the sound of the maid and my grandmother, Lilla Johnstone McCutchen, setting up cookies and coffee in the adjacent dining room."

Richards says her favorite childhood memory is "the absolute freedom to go anywhere on the Horseshoe and know that everybody knew who we were, and we were safe," along with the feeling of family demonstrated by her grandfather welcoming students into his home.

"There'd be lectures in the classroom, but then the kids who were especially interested would be very welcome to come over after class,” she says. "They were much more open than in a class situation, and I thought it was at least as valuable as being in class. Papa certainly thought they were worth the extra time."

That hospitality, that feeling of family, has stayed with Richards all her life, and contributed to her determination to see such courtesy extended to everyone. She grew up, after all, in a very different time, and found that her gender made her unwelcome in some places even at the university she loved.

Richards returned to South Carolina as a student in 1957, ready to follow her father and uncles into engineering. The reception on campus was not what she would have hoped. 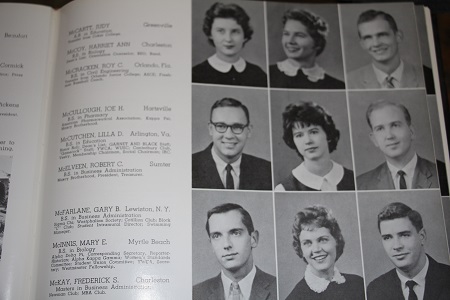 Lilla McCutchen, not yet Richards, is pictured here in the 1961 UofSC yearbook.

As the 1950s drew to a close in South Carolina, Richards found that women were considered anything but equal to men. She struggled to find a classmate willing to take her on as a lab partner, and she took on the burden shared by many pioneers of carving a new path.

"There was a distinct difference in expectation,” she says. "There was still a hangover of the women students not being expected to be as intellectually involved. They were supposed to be there just to get married, which was not my goal at that point."

Richards refused to let any of the obstacles slow her down. She knew she was not in any way inferior to men, and she moved on from college into a career of proving it.

She became not only a success, but a leader. After her start in engineering, she changed her major to education and returned to Virginia after earning her degree from South Carolina in 1961. She became a writer and editor with the Economic Research Service, inspired by her grandfather’s love of economics.

Stepping forward as an innovator there, she launched The Farm Index, a magazine for economists. She also wrote for the U.S. Department of Agriculture, and saw her work published in newspapers including The Washington Post.

As her reputation grew, Virginia Gov. Douglas Wilder called on her in the early 1990s to serve on the board of governors at George Mason University, where she would serve for six years. She was also elected to the Board of Supervisors for McClean, Great Falls and Herndon counties, joining eight other board members to lead a district of 800,000 people.

Early in her time at George Mason, she demonstrated that her priority was education, and that she was unafraid to ruffle feathers by putting academics ahead of athletics. She cast the deciding vote in the board’s decision not to launch a football program. It was not a popular decision, but she was convinced it was the right one and never regretted it.

She kept careful records during her four years on the Board of Supervisors, and those notes have since been published as part of a book on the history of the area, earning her recognition from the district she served.

Richards also never forgot her roots in South Carolina. Her grandfather passed along to her many pieces of furniture from McCutchen House, and she donated a grandfather clock and corner cupboard back to the university. The cupboard now stands in the room where Richards slept as a little girl. The clock is downstairs and is one of the first things arriving visitors see.

In 1984, Richards and her sisters established a scholarship to honor their father. The James Malcolm McCutchen Electrical Engineering Scholarship remains in place today in the College of Engineering and Computing. Richards has also donated a treasure trove of family memorabilia, in addition to other contributions to her alma mater.

"I'm very pleased by what's happened over time,” she says, looking back and reflecting shortly after celebrating her 80th birthday this year.

Asked what she would like her family’s legacy to be, what people should think when they hear the name McCutchen, her answer is short and simple.

“Hospitality and scholarship,” she says.

Thanks to her grandfather and grandmother, their children and to Richards herself, that legacy is secure. McCutchen House bears the family name and stands for just those things, now as ever on the historic Horseshoe.

Visit the McCutchen House website to learn more about dining options and wine and culinary classes that are available to the community. Operated as an applied learning lab, the restaurant offers students an opportunity to experience what it takes to run a restaurant. 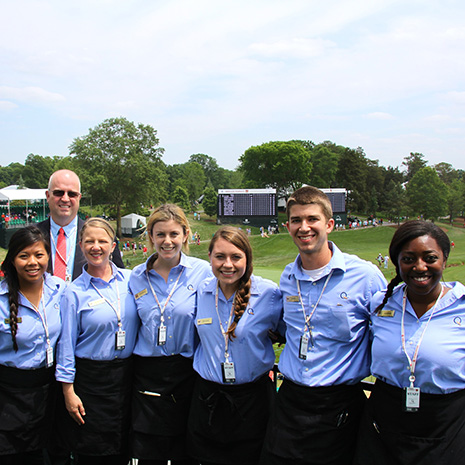 We are a community of travelers, sports fanatics, foodies, retail therapists and moment makers. But this isn’t a hobby. It’s our business. We’re lifelong learners, leaders, scholars and entrepreneurs, and together we’re shaping the future of the world’s customer-experience industries.