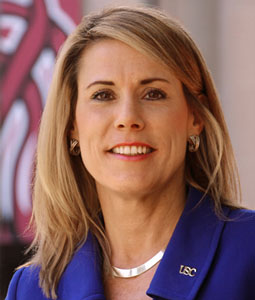 Tina Weeks Weaver serves as the director of alumni and external relations for the College of Hospitality, Retail and Sport Management  at the University of South Carolina. Prior to this position, Weaver was an instructor, advisor and internship coordinator in the Department of Integrated Information Technology where she taught business communications and supervision. In 2003, Weaver received the Harry E. Varney Teacher of the Year Award and the South Carolina Business Education Association Educator of the Year Award.

In the fall of 2003, Weaver took on a new role for the college to work closely with the dean on special projects and events. This included chairing the committee that developed HRSM 301 and then being the instructor of record for the very first section taught. She also coordinated the college's signature golf tournament known as The Garnet Jacket Classic, which raised funds for student scholarships and college initiatives. During this time, Weaver was integrating alumni activities into her efforts to improve alumni relations and make it a priority for the college. In 2006, alumni relations became the primary focus of her position, and the HRSM Alumni Society was officially launched with the mission to "build an engaged and active alumni group who will work together with industry partners to create a strong network that supports college endeavors and current students."

In 2010, Weaver added the communications role to her job description and, with the support of the dean, repurposed an existing position to create a public information director position that would focus on writing about and publicizing the activities and accomplishments of faculty, students, administration and staff.

Weaver received her B.S. in business from Coker University in 1991, and her M.A.T. in business and marketing education from the University of South Carolina in 1997. She also studied German and business at the Carl Duisburg Gesellschaft in Cologne, Germany.

Prior to coming to the university in 1995, Weaver worked in undergraduate admissions at Coker University in Hartsville, South Carolina, and Newberry College in Newberry, South Carolina. She currently serves as immediate past president of the Coker University Alumni Association and is a founding member of the university’s first alumni affinity group, Coker Black Alumni Network (CBAN).