An Ode to the New Cut

In the 1840s, enslaved workers in Charleston built the “New Cut,” a waterway that allowed  boats to pass from Church Creek to the Stono River. New Cut Plantation is named for this body of water.

Consider the river a road – the kiss
of the Blacks’ bodies silhouetted over the water,
wide but not wide enough
to support the history that builds on it. I can
sit on a picnic blanket and study it as it moves,
If the water flows east does that mean it’s
the way more traveled by? Wonder
whether the slaves had enough slack in their
shackles that they could choose which
direction to escape. Look all around and see
a rowboat lifted onto the sand bed. Question it.
If it has been lying there for centuries, if it
may have been stolen by the bodies who build.
More likely, it belongs to the White family
who bought the property years later— used for
the dad to take his son out fishing.
I wonder what kinds of fish brew themselves
in this cut. If they were burned and cooked for
supper by the slaves who sailed overhead, in
search of an escape. Spent their Sundays
dipping their legs into the water, enjoying the cool
of the water for a second before getting back
to work. Spent Sundays on the banks praying to
God and Mary and Jesus because Church
wasn’t held on the New Cut and prayer was as
close to Mass as they could get. Not praying
to God with a hand over hand but with a hand
on shovel and a hand on canal that they’d see
the end of the water road, not just wonder how
the slaves building it were. 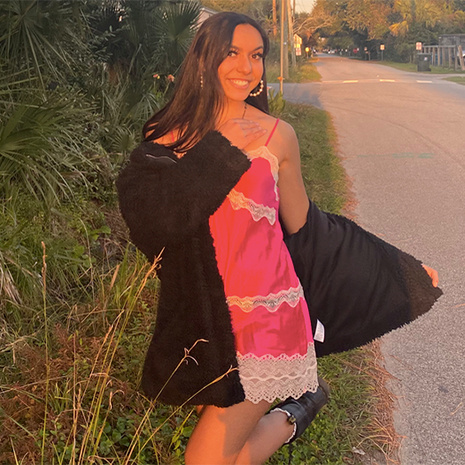 Cassidy Lewis is a junior at Charleston County School of the Arts, where Danielle DeTiberus is her creative writing teacher.