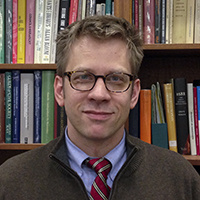 Colin Wilder is Assistant Professor of Digital History as well as Associate Director of USC’ Center for Digital Humanities. He joined the History Department in 2016, prior to which he held research postdocs. Wilder is by original training an historian of early modern Europe, specifically early modern legal and political thought. He received his PhD from the University of Chicago in 2010, a BA in Philosophy even before that.

Wilder’s current book manuscript, The Development of Personal Freedom in Enlightenment Germany, argues that personal freedom developed in Germany in the seventeenth and eighteenth centuries within the legal institutions governing property rights. “Personal freedoms” in this context included many modern day property rights—the use of money and movable commercial goods, control over real property, entry into debt and credit relationships—and emerging from these rights over time, a growing entitlement to freedom over one's own person. Within the German context, these changes came not from discourse in the public sphere, but rather, grew out of conflicts over property rights in Germany’s emerging commercial markets. A broad range of actors—from serfs and merchants to princes and kings—drove jurists during this period to generate new bodies of law to resolve these legal challenges, and in the process, established a well-defined set of personal freedoms governing individuals’ basic rights to buy, sell, use, leverage, and borrow. This expansion of personal freedoms had both a richer theoretical framework and more significant practical consequences than has previously been understood by historians. These modern developments grew out of rich veins of idea and myth, both popular and elite. However, actual changes came from the conflictual operations of modern legal institutions - conflict of bodies of law, theoretical debates, adversarial courtroom structures, and needs of policy-makers to solve perceived problems or achieve new goals of political economy.

Wilder also actively collaborates on scholarship with other faculty and students both at USC and beyond. These collaborations are divided into three main, productive projects at present: the Carlyle Letters Online (part of the Victorian Lives and Letters Consortium); Snowvision; and the Whole Earth Book Catalog (or WEBC, formerly known as the Dirty History Crawler). Peer-reviewed publications issuing from each can be found on Academia.edu and Wilder’s current CV.

Wilder’s teaching at USC falls into three main areas: Digital History, the history of capitalism, and modern and early modern Europe. Those interested may find syllabi for the first and second linked at https://sc.academia.edu/ColinWilder/Digital-Humanities-Digital-History-Courses and https://sc.academia.edu/ColinWilder/History-of-Capitalism-Courses. Students interested in these courses of study should send emails of interest to Dr. Wilder.

Wilder is also associate director of the Center for Digital Humanities at USC. During 2020-2021, the Center has been / was on low-activity status because of the COVID-19 pandemic, but historically over the past decade, Center faculty including Wilder have worked with dozens of USC faculty and students to conceive, design, support, and develop digital projects. The Center has put on numerous public events, including open houses, lectures, workshops, trainings, and brown-bag talks. More information on CDH activities and projects can be found at http://sc.edu/about/centers/digital_humanities/index.php.

Some of Wilder's older work including papers and parts of his dissertation can be found at https://sc.academia.edu/ColinWilder.