Monique J. Brown is an assistant professor in the Department of Epidemiology and Biostatistics in the Arnold School of Public Health and a faculty affiliate in the S.C. SmartState Center for Healthcare Quality, Rural and Minority Health Research Center and the Office for the Study of Aging.

When Monique Brown looks at population health, the epidemiologist considers conditions that can make it better — and worse — for different groups of people. When it comes to the COVID-19 pandemic, Brown says, there are myriad pre-existing conditions that make the virus far worse for African Americans. 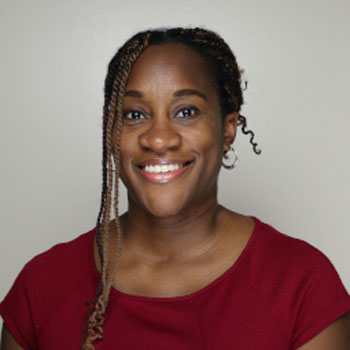 Monique Brown is an assistant professor of epidemiology and biostatistics in the Arnold School of Public Health.

“I would say pre-existing conditions are the root of the disparities we’re seeing with COVID-19,” says Brown, an assistant professor in epidemiology and biostatistics who studies HIV intervention and prevention, childhood trauma and social, behavioral and mental health and aging. “If you have an immune system that’s functioning well, you can fight it off. But with pre-existing conditions, your immune system is impaired.”

The list of pre-existing conditions that make it more difficult to survive COVID-19 includes the usual suspects: diabetes, heart disease, asthma and other lung diseases, obesity and high blood pressure. Other factors such as incarceration and HIV infection have a negative impact as well, Brown says.

“When you have chronic conditions, they don’t come and go — they affect every aspect of your health, so these are major factors when we think about surviving COVID-19,” she says.

But while there may not be genetic factors, there are many social factors at play. Historically, African Americans have had less access to health care and lower incomes.

The data on many such pre-existing conditions for African Americans is grim. Diabetes is 60 percent more common in black Americans than in white Americans. Blacks develop high blood pressure earlier in life and with much higher levels than whites. African Americans have a higher (11.2 percent) prevalence of asthma than whites (7.7 percent), according to the American Lung Association, which also reports that blacks are three-times more likely to die from asthma than whites.

While many Americans are obese, African Americans have the highest age-adjusted prevalence of obesity (49.6 percent), followed by Latinos (44.8 percent), whites (42.2 percent) and Asians (17.4 percent).

“Based on research, we haven’t seen a difference in genetic makeup in terms of African Americans being more susceptible to developing these conditions,” Brown says. “But while there may not be genetic factors, there are many social factors at play. Historically, African Americans have had less access to health care and lower incomes.”

In some cities, African Americans have often lived in densely populated areas with limited access to fresh fruits and vegetables and safe places to walk. “So, there are some social structural issues that have been in place for decades that affect their health today,” she says. “The rates for many pre-existing conditions would be more even among races if there was more economic equality.”

Finally, Brown, points to higher rates of HIV infection and higher incarceration rates among African Africans as further risk factors for COVID-19 infection. Systemic institutional bias throughout the criminal justice system has led to an incarceration rate among African Americans in state prisons that is more than five times the rate of whites. Those who are incarcerated face an increased risk of contracting COVID-19 due to the difficulty of physical distancing under such conditions, among other factors.

While African Americans have been hit especially hard by COVID-19, indigenous people (American Indians) have experienced a mortality rate more than eight times as high as the mortality rate for whites in New Mexico and five times the rate for all other groups in Arizona.

“And the Latino population has been affected, as well, with higher rates of mortality and morbidity for many of the same reasons,” Brown says. “Another factor to consider is the kinds of jobs that people of color have. They are more likely to be essential workers or work in service jobs with higher exposure rates to COVID-19.”