While Ciaran Fairman was trying to figure out how to extend his athletic career beyond college soccer, his true calling was subtly making itself known. After changing his major several times, Fairman found a mentor in Jason Crandall, then a faculty member in the Department of Exercise Science and Kinesiology at Kentucky Wesleyan College, who helped him find a way to connect his love of sports with what he was learning in the classroom.

“Dr. Crandall would watch me play soccer and then ask me questions on why we did specific things in preparation for our game,” Fairman says. “He would ask me about the physiological relevance of our warmups and why we did specific movements in preparation for our games. It was the first time I really got excited about the things I was learning and how they could be applied to real-world scenarios.”

Fairman initially set his sights on a career as a strength and conditioning coach, but then his mam (he’s originally from Ireland) was diagnosed with breast cancer.

Later that year, he attended an American College of Sports Medicine meeting with Crandall, where he learned more about the field of exercise oncology. Fairman had found his vocation: researching how exercise and nutritional interventions can target the side effects of cancer/treatment for individuals diagnosed with cancer.

Fairman followed his bachelor’s degree in health science with master’s (Georgia Southern University) and doctoral (The Ohio State University) degrees in kinesiology. He completed a postdoctoral research fellowship in exercise medicine at Edith Cowan University in Australia before looking for a tenure-track position.

“The Arnold School was a no brainer,” Fairman says of his decision to join the Department of Exercise Science as an assistant professor. “The caliber of faculty here is incredible, and I was really attracted to the idea of being able to work with and learn from such brilliant minds. More importantly to me, I care deeply about the people I work with and the culture and environment I am in. What came across in my interview process here is that the standards and expectations here are only matched by the support and guidance available. On top of being brilliant scientists, the faculty and staff here are great people, so it was an easy decision for me.”

After beginning his appointment at UofSC in October of last year, Fairman launched the Exercise Oncology Lab and joined the Cancer Prevention and Control Program as a core faculty member. He is looking forward to helping the department grow and mentoring students in both the classroom and the lab.

"We are extremely fortunate to have Ciaran Fairman join our faculty," says exercise science chair Shawn Arent. "In addition to being a first-class researcher and educator, he is an even better person. His passion for the field, excitement, outgoing personality, sense of humor, and humility make him exactly the type of addition we want to our department and culture. He will play an integral role in fulfilling the mission of our program and helping enhance the standard of excellence we already have here."

“I was lucky to have exceptional mentors throughout my career, in Dr. Kristina Kendall for my master’s degree and Dr. Brian Focht during my Ph.D. program,” Fairman says. “Their guidance and personal care had a profound impact on the trajectory of my career. This has both inspired me and influenced my mentorship style and has given me a great passion for creating a supportive environment for the next generation to thrive in.”

Fairman’s approach to his work is not only shaped by the pivotal moments during his undergraduate tenure that led him to pursue a career in exercise oncology. His perspective is also influenced by his working-class background in Dublin, where he was the first in his family to go to college, and the opportunities he has had ever since.

“I've been fortunate to receive my education from all different types of institutions, from a small private college of 700 kids at Kentucky Wesleyan College, to 50,000 at Ohio State for my Ph.D., and completing my postdoctoral fellowship at a research institute in Australia,” he says. “These experiences have shaped how I was seen, and they inspire me to make sure students from all different backgrounds feel like they have a shot at being successful – however they define it.” 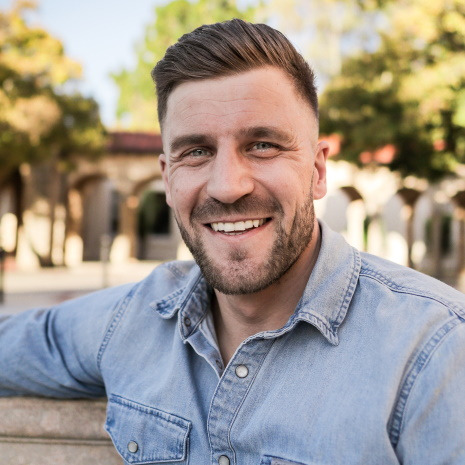 Ciaran Fairman is an assistant professor in the Department of Exercise Science and the director of the Exercise Oncology Lab.