Angela Liese, professor of epidemiology and biostatistics, has received the 2018 Educational Foundation Award for Research in Health Sciences. Liese’s selection marks the third year in a row and the sixth out of the past 10 years that an Arnold School faculty member has been chosen for this honor.

Liese joined UofSC in 2000 as a research assistant professor in the Arnold School’s department of epidemiology and biostatistics. In the nearly two decades since then, she has published more than 150 peer-reviewed papers and risen to the position of professor while also leading Center for Research in Nutrition and Health Disparities for five years (2008-2013).

She has become an internationally recognized authority on nutritional epidemiology, diabetes epidemiology, and public health nutrition. Liese’s expertise has been sought by leading committees and organizations to help shape national public health guidelines and recommendations.

In recognition of her numerous contributions, Liese won the James A. Keith Excellence in Teaching  Award in 2007 and the Arnold School of Public Health Research Award in 2011. In 2016, Liese was selected by the university receive the Breakthrough Leadership in Research Award. Just last year, she received two highly cited paper awards and the H.A. Tyroler Distinguished Alumni Award from her doctoral alma mater, the University of North Carolina.

Angela Liese awarded $3.3 million NIH grant to research the impact of disparities in food security for youth and young adults with diabetes 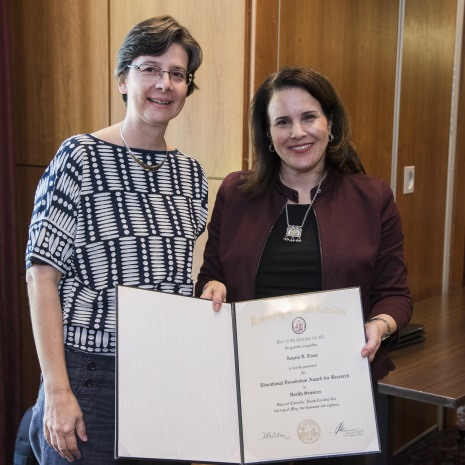 Angela Liese (pictured left with Provost Joan Gabel) is a professor of epidemiology and biostatistics.