Associate professor of Health Promotion, Education, and Behavior (HPEB) Jim Thrasher has collaborated with public health organizations at home and abroad for over 15 years to conduct research, shape policy and promote tobacco control and cessation. His efforts were recognized on May 31 during a ceremony to commemorate World No Tobacco Day when the World Health Organization (WHO) and Pan American Health Organization (PAHO; the regional office of WHO for the Americas) presented Thrasher with a 2016 World No Tobacco Day Award for the Americas.

This year, these annual awards were given to two academicians (one from Canada and one from the United States) and one nongovernmental organization to recognize outstanding contributions to advancing the policies and measures contained in the WHO Framework Convention on Tobacco Control. The theme of this year’s event was “plain packaging,” which is a policy that bans the use of brand imagery and colors on tobacco packages in order to reduce the appeal of tobacco for youth, reduce misperceptions of the tobacco-related harms, and enhance the effectiveness of warning labels on packages (Learn more from WHO Director-General Margaret Chan in her video or statement, WHO’s press release, key messages, and FAQs ).

“Plain packaging is an evidence-based intervention that can enhance the effect of the health warnings on packages," said Adriana Blanco, PAHO advisor on tobacco control, in a statement. “This year's winners have helped build the evidence base on how tobacco packaging and health warnings impact tobacco use and how civil society can help to move comprehensive tobacco control forward, as happened in Brazil.”

Thrasher’s research has done much to advance tobacco control and cessation both in the United States and internationally. Amongst his many studies on tobacco packaging, he has examined how tobacco branding influences the appeal of smoking for adults and kids, which types of graphic warning labels are most effective for reducing tobacco use, the effects of plain packaging in Australia (the first country to implement this policy), and the effects of the Food and Drug Administration’s ban on misleading health claims for cigarettes, such as “light” and “low-tar.”

Some of Thrasher’s other research has investigated how recently introduced tobacco innovations, like flavor capsules, mislead smokers about the harms of smoking and appeal to youth. Another recent study examined alcohol and smoking portrayals in nationally-produced films from nine countries across Europe and the Americas. Earlier this year, Thrasher was enlisted by WHO to assist with the dissemination of their evidence-based report on Smoke-Free Movies—a report that included data and recommendations from his studies on smoking portrayals in films.

Thrasher plans to continue his tobacco-related research to reduce tobacco use both locally and globally. “This award recognizes the importance of international research collaborations on innovative policies that can help stop the epidemic of tobacco use around the world,” he says. “Since Australia first adopted plain packaging in 2012, France and the United Kingdom have implemented the policy and numerous other countries are moving towards implementation. There is still a lot to be done to combat the global tobacco epidemic, but along with other tobacco control policies that the World Health Organization recommends, plain packaging represents a significant step forward.” 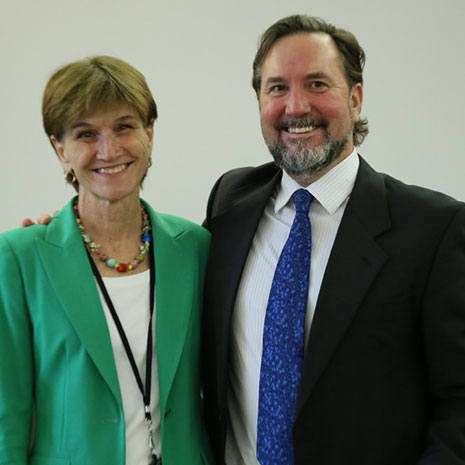 Jim Thrasher (pictured with Chessa Lutter, Senior Advisor of Food and Nutrition at PAHO) received the 2016 World No Tobacco Day Award for his contributions to tobacco control.