Designed to recognize outstanding alumni whose work have made a difference to the profession and in the health of an identified community or population, the Arnold School of Public Health Alumni Awards are conferred at the annual hooding ceremony. Selected from a pool of nominations of alumni who graduated in the past 10 years ago, Kara Whitaker has been awarded the Gerry Sue Arnold Alumni Award. Susan Bolick is the recipient of the Norman J. Arnold Alumni Medal, which is bestowed upon an alumna/us who has graduated more than 10 years ago. 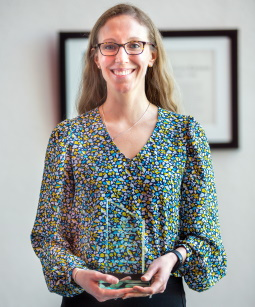 Kara Whitaker is an assistant professor at the University of Iowa’s Department of Health and Human Physiology, where her research focuses on maternal-child health and health disparities. She got her start in these areas as a graduate student in the Arnold School’s Department of Exercise Science – first in the Master of Public Health in Physical Activity and Public Health program and then in the Ph.D. in Exercise Science program (ranked No.1 in the nation).

As a member of the Behavioral and Biomedical Interface Program (an NIH-funded T32 training program) and a researcher with the UofSC Prevention Research Center’s Health in Pregnancy and Postpartum (HIPP) Study, Whitaker built her foundation as a scientist in the field. After graduating in 2015, she completed a Postdoctoral Fellowship in Cardiovascular Disease Epidemiology and Prevention at the University of Minnesota before accepting her current position.

Just two years later, Whitaker was awarded her first R01 grant from the National Heart, Lung, and Blood Institute to support The Pregnancy 24/7 Study. Working with members of her Physical Activity & Women’s Health Lab, Whitaker is examining how 24-hour activity-rest patterns are associated with hypertensive disorders during pregnancy. The team is already using their findings to develop evidence-based lifestyle interventions, such as the INSPiRE Study, an intervention designed to increase physical activity among pregnant women.

Whitaker’s work has already resulted in nearly 70 peer-reviewed articles, much of it highly cited and published in high-impact journals. She is a Fellow in the American College of Sports Medicine and the American Heart Association and recently won the Early Career Scholars of the Year Award from the University of Iowa.

“Dr. Whitaker has distinguished herself as an emerging leader in cardiovascular disease epidemiology and physical activity,” says Sara Wilcox, professor of exercise science and Whitaker’s mentor. “Her performance and contributions are at a caliber not often seen, and this exceptional performance also occurred while she was a junior professor during the COVID-19 pandemic. I am so proud of all she has accomplished, and I see a continued bright future.”

This award is open to all alumni who graduated less than 10 years prior to the current year. Alumni whose work has both made a difference to the profession and in the health of an identified community or population are eligible for this award. 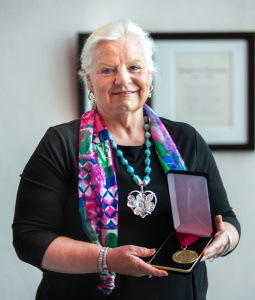 Beginning in the mid-1980s, Susan Bolick began working toward the creation of a cancer registry for South Carolina. As the director for administrative services and the cancer registry at Palmetto Baptist Medical Center (1978-1993), she knew a statewide registry was essential to tackling the second leading cause of death in the United States and South Carolina.

One year after graduating from the Arnold School’s Department of Epidemiology and Biostatistics with a Master of Science in Public Health in Epidemiology in 1992, she made this vision a reality. Bolick served as the first director for the South Carolina Central Cancer Registry, which is based at the Department of Health and Environmental Control (DHEC). She led the registry for 25 years (receiving the Distinguished Service Award from the North American Association of Central Cancer Registries in 2015) until she transitioned into the Deputy Director for the Bureau of Health Improvement and Health Equity role for her final two years of service prior to retirement.

The South Carolina Cancer Registry that Bolick helped create has served as a model for others and is regularly awarded Gold Certification from the North American Association of Cancer Registries and the CDC Registry of Distinction. Over the years, Bolick and her team have used the registry to produce detailed reports of surveillance data to guide cancer prevention and control efforts.

In 2018, they developed a 20-year trends report that revealed decreases in cancer incidence and mortality rates and identified areas of priority (e.g., African American men continue to experience a disproportionate share of cancer burden). As a result, Bolick spearheaded an in-depth report on Cancer in African American Men, which led to a statewide focus on addressing this disparity.

“Ms. Bolick’s visionary leadership and steadfast commitment has led to innumerable contributions to statewide cancer prevention and control,” says Anthony Alberg, chair for the epidemiology and biostatistics department and long-time chair of the registry’s Cancer Surveillance Committee. “This includes her passion to improve the health of the communities throughout South Carolina. Through thick and thin, Ms. Bolick’s skill, intelligence, strength, grace and positive spirit carried the day.”

This award is open to all alumni who graduated more than 10 years prior to the current year. Eligible alumni should demonstrate work that has had both a positive impact on the profession and on the health of an identified community or population and has brought recognition to the Arnold School of Public Health.