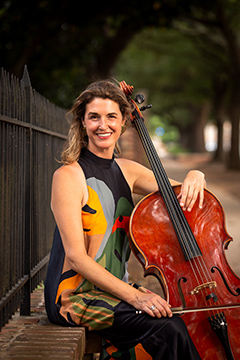 A sought-after and distinctive performer, Claire has collaborated with such master artists as Emanuel Ax, Sir Simon Rattle and Dawn Upshaw, and worked closely with luminary composers from Meredith Monk to Steve Reich to Herbie Hancock. Over the past 25 years, she has enjoyed a prominent solo career, appearing with major orchestras around the world including the Spartanburg Symphony Orchestra, Finland’s Kuopio Symphony Orchestra and The National Symphony of Honduras.

Claire is a co-founder of Decoda, Carnegie Hall’s Affiliate Ensemble, and director of its initiative Music for Transformation, a criminal justice program which brings collaborative songwriting workshops to incarcerated communities. In this capacity, she was invited twice to share Decoda’s work with the Obama administration in the White House.

In 2019, Claire returned to her native South Carolina to join the University of South Carolina School of Music’s faculty, where she enjoys a robust studio of talented young cellists. She is the coordinator of Bridging Our Distances, the community engagement arm of the School of Music, and is the director of The Collective, a graduate ensemble dedicated to creative and innovative community performances and programming.

Claire attended the University of South Carolina, the San Francisco Conservatory of Music and The Juilliard School, where her primary teachers were Robert Jesselson, Joel Krosnick and Bonnie Hampton.