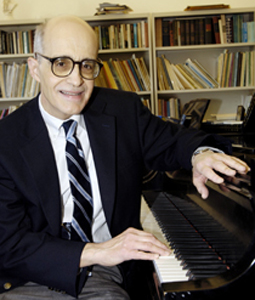 Charles Fugo is currently Professor of Piano at the University of South Carolina School of Music, where he teaches piano and coaches chamber music. He received his baccalaureate degree at the Oberlin Conservatory of Music, with additional study at the Akademie des Mozarteums, Salzburg, Austria, and his MM and DM performance degrees at Indiana University, where he was also awarded the Performer's Certificate. During his study at Indiana he was named a state winner in the National Federation of Music Clubs Young Artist Division. His principal teachers include Abbey Simon, Jorge Bolet, and Joseph Schwartz, with additional study under Winfried Wolf, Sidney Foster, and Robin McCabe, and chamber music coaching under Menahem Pressler of the Beaux Arts Trio.

The recipient of the 2008 Cantey Outstanding Faculty Award given by the School of Music, he was a staff member of the Anderson (SC) Piano Performance Camp and the summer honors program of the South Carolina Governor’s School for the Arts and Humanities, serving in the latter capacity for thirteen years. He was also official accompanist for the Josef Hofmann Competition, held in Aiken, South Carolina, over a five-year period. For over ten years he was sponsored by the South Carolina Arts Commission (Stage South Community Tour) as a member of the Jesselson/Fugo Duo and the American Arts Trio. A frequent adjudicator, he has judged at local, state, and regional levels. In 2017, he was named a Foundation Fellow by the Music Teachers National Association.

He has played collaborative recitals at New York City’s Weill Recital Hall at Carnegie Hall, and has recorded the complete music for viola and piano by Robert Schumann in collaboration with Lenny Schranze as well as transcriptions for double bass of works by Ralph Vaughan Williams, Franz Schubert, and César Franck in collaboration with Craig Butterfield, both issued on Centaur Records. As a member of the Jesselson/Fugo Duo he has also participated in a CD that is available online, “Carolina Cellobration,” featuring works of six South Carolina composers for cello and piano commissioned by the Duo. He has performed throughout the Southeast as well as in other areas of the United States, and appeared frequently on South Carolina Educational Radio and Television as both soloist and chamber musician.