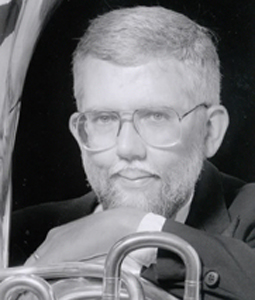 Ronald Davis joined the UofSC music faculty as Professor of Tuba and Euphonium in 1985 and has been principal tuba with the South Carolina Philharmonic Orchestra since 1999. For eleven years he served as Coordinator of the Brass Teaching Division.

Dr. Davis was born and raised in Los Angeles, California. He earned a doctor of musical arts in tuba performance from the University of Southern California and also holds degrees from California State University-Fullerton and Bowling Green State University. His major teachers were Jim Self, Tommy Johnson, Roger Bobo, Ivan Hammond and Ronald Bishop.

As an orchestral player Dr. Davis has performed with the Augusta Symphony Orchestra, the Santa Barbara Symphony, the Los Angeles Master Chorale and Sinfonia Orchestra under Roger Wagner, the Los Angeles Philharmonic, and the Charleston and Charlotte Symphonies. In 1991 as a guest soloist with the South Carolina Philharmonic Orchestra, Dr. Davis performed the South Carolina premiere of the Concerto for Bass Tuba and Orchestra by Ralph Vaughan Williams.

Dr. Davis has a varied background as a freelance performer, including being a founding member of the first professional tuba quartet to play at Disneyland, The Tubadours. The group capped its early years by winning television's The Gong Show. He was an original cast member of the Pioneer Hall Hoop-De-Doo Review at Walt Disney World, Florida (playing banjo) and also performed regularly at California’s Knott's Berry Farm and Ghost Town and Six Flags Magic Mountain. During this time, Dr. Davis served as an adjunct instructor/lecturer at California Lutheran College, California State University-Fullerton, and as member of the Faculty Brass Quintet at the University of California, Santa Barbara. Just prior to coming to South Carolina, Dr. Davis served a one-year appointment as Visiting Assistant Professor of Tuba, Euphonium and Band at the University of Wisconsin-Madison.

Dr. Davis gained a reputation as a tuba scholar through his regular reviews and articles in the ITEA Journal published by the International Tuba/Euphonium Association. In 1991, R. Winston Morris of Tennessee Technological University conceived The Tuba Source Book project to assemble the most complete single volume devoted to one musical instrument. Dr. Davis was selected to assemble the discography chapter. Indiana University Press published The Tuba Source Book in 1993. Ten years later Dr. Davis revised and enlarged the discography, which was published in The New Tuba Source Book: Guide to the Tuba Repertoire, released in fall 2006.