The Leadership Awards recognize individuals who have distinguished careers and a history of service to the Moore School, the University of South Carolina and the community.

The Distinguished Service award is presented to an individual who has rendered extraordinary service to the Moore School.

The Distinguished Corporate Partner award is presented to a corporate partner that has demonstrated an extraordinary commitment to the success of the school’s students, faculty and programs.

Nominations for these awards are accepted annually on a rolling basis. To nominate someone for a Distinguished Award, please complete this form.

Gore attributes her part of her journey to the C-suite with Primis to the “well-rounded business acumen” she gained from her time at the Moore School.

“My finance and marketing concentrations are directly correlated to my career growth in the financial industry,” she said. “I believe my business creativity, ingenuity, innovation and graceful pivoting skills were ignited at the Moore School and seriously honed immediately upon graduation in 2007, which was right at the beginning of the great recession in the U.S.”

Prior to joining Primis, Ann-Stanton was Ameris Bank’s head of marketing and then director of corporate communications as the company grew from $1 billion in assets to more than $20 billion. During her 14-year tenure, she led the marketing and communications efforts for 18 mergers and acquisitions and launched the bank into a new era with a new bold and humanized brand.

A 2018 Best and Brightest award recipient by Columbia Business Monthly, Gore is on the faculty with the South Carolina Bankers School. She was recognized as Ameris Bank’s Enterprise Services Banker of the Year in 2016, among other internal accolades. She has volunteered with the Junior League of Columbia since 2008 and served on the organization’s executive management board from 2019-2021.

(’10 finance and insurance and risk management)

Northwestern Mutual’s top intern in 2009, Stevens passed his Series 7 General Securities Representative Exam while a senior at USC and was one of the youngest stockbrokers in the state at the time.

“The Moore School taught me the importance of commitment, discipline and follow through — all of which have been instrumental in growing my financial planning practice,” he said. “I knowingly chose a harder path double majoring at the business school; the grit I learned gave me the confidence to bet on myself in an all-commission role building a business from scratch. Nothing worth having comes easy, and my time at the Moore School helped me learn this.”

He has worked as a financial advisor and wealth management advisor for Northwestern Mutual in Columbia since graduating in 2010.

Stevens currently serves the Moore School through their mentorship program, as a Moore Ambassador and member of the USC-Business Partnership Foundation Board of Advisors. In 2017, he was named by the Columbia Metropolitan Magazine as one of Columbia's “Top Ten Young Professionals.” He served for more than four years on the Moore School’s Young Alumni Board, including as chair in 2018-2019.

He has been married to Reece for two years, and they anticipate welcoming their first child three days before the Business Leadership Dinner where he’ll be recognized for the Distinguished Young Alumni designation.

UPS is an invaluable partner for the Moore School. Two of their top executives share their expertise while serving on center boards and inform the school’s course curriculum, thought leadership and research; UPS participates in master’s-level and undergraduate courses; their generous donations have funded the UPS Global Scholars program; they hire interns and alumni for a variety of positions; and they mentor students.

UPS consistently works with the Master of International Business and operations and supply chain programs on semester-long projects to give students real-world experience, and the students provide top-level recommendations to enhance UPS processes. Learn more by visiting bit.ly/mibups21, bit.ly/mibups22 and bit.ly/upsosc. Executives have also participated in professional development programming and entrepreneurial leadership.

Since 1989, UPS has been proud to partner with the Moore School in internship and job recruitment and leadership development.

While most people think of the company’s package delivery function, UPS has transformed into a much more complex global corporation. Over the past couple of decades, the organization has made significant strides to increase its international reach. Today, UPS operates in more than 220 countries and territories and employs more than 534,000 people worldwide.

Titles at time of award, *Deceased 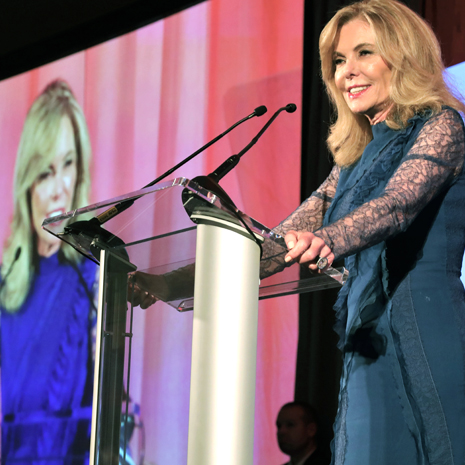