Sali Christeson has combined her innate entrepreneurial talent with skills she learned at the Darla Moore School of Business to shake up the women’s workwear world. Argent – her affordable, comfortable and bold apparel line – aims to “dropkick the glass ceiling.” And it is getting national and celebrity attention.

Living in Los Angeles and traveling the country to promote Argent, Christeson (’12 International MBA) is a long way from the Hardeeville, South Carolina, farm where she grew up, but that is where the seeds of her business acumen were planted. As a kindergartner, she said all she wanted was her own stapler and her own desk.

Christeson, who recently came to the Moore School to deliver the orientation keynote to incoming MBA students, was an entrepreneur before she could even pronounce the word.

At 5 years old, “she was so determined at anything she did,” said Christensen’s mother, Sarah Jane Sumer, who accompanied her to Columbia for the orientation. “She had a piggy bank business and a lemonade stand. She’s always been a little entrepreneur.”

This drive is what allowed Christeson to take her idea for a womenswear company and turn it into a brand recently featured in InStyle and Vogue Business and on Yahoo Finance and CNN. In February, the 11-staff company received $4 million in investment funds through Founders Fund, which invests in “companies building revolutionary technologies” and whose portfolio contains Facebook, Airbnb and Spotify. Argent backers also include Stitch Fix chief executive officer and founder Katrina Lake, renowned investor Sonja Perkins, tennis champion Andy Roddick and actress Brooklyn Decker.

Christeson’s vision for Argent came from her own frustrations as a young professional who couldn’t find fashionable, functional clothing to wear to the office. She emphasized fashion is primarily male-dominated, with only 14 percent of leading womenswear brands led by women.

“For some reason, no one had thought to rethink the category,” she said. “The workforce is shifting to a more casual place. [Brands were still offering] black, stodgy pantsuits. [Women’s professional wear] is an unsexy category; it’s almost an afterthought.”

Most jarring for Christeson as she did research on professional women’s clothing is that women are judged based on their appearance, and it can have quantifiable results – to the tune of almost 20 percent less earnings over their career if they miss a promotion or fall behind their male counterparts.

After realizing the need for a comfortable yet fashionable women’s line, she quit her job as a cloud services manager at Cisco technology company four years ago to begin Argent, named for her great-grandfather’s Hardeeville-based lumber company, which operated from 1916-1959.

Argent is different from other brands in that it combines functionality such as working pockets with colorful, stylish Manhattan-designed clothes. The high-quality line includes pants ranging from $188-248, tops from $52-148 and blazers from $298-598. Christeson said the clothes hold their value and can be worn for close to a decade in some cases.

“We want to support women in whatever they want to accomplish in their career,” Christeson said. “Our mission is resonating, and our product is resonating. We are serving as a point of connection – people are buying into what we’re building.”

Having celebrity clients has helped Argent build brand awareness, but Christeson said to raise investment funds, she’s had to tell her brand’s story through data. Analyzing data is a major skill she said she honed at the Moore School.

To prove the value of Argent to investors, “I did extensive market research; I conducted a survey with 400 people and did interviews to show [the lack of professional womenswear] was an issue beyond just me,” she said. “The design starts with the customer … No one is really thinking about the customer, so it left this underserved market to surprise and delight.”

As the founder and CEO of Argent, Christeson said networking is her most valuable tool, and she leverages the relationships she initiated at the Moore School. Some of her former UofSC classmates are Argent customers.

Even before creating Argent, she credits the Moore School with leading to her job at Cisco, which was an educational experience that helped her fully understand supply chain before taking on her own company.

Creating the Cisco cloud initiative “was really awesome. It gave me a business understanding and was where my problem-solving approach was developed,” she said. “I came out [of the Moore School] with hard skills and soft skills – my level of confidence, the experience I had hands on and in the classroom, I was able to take that into the corporate setting and be a lot more lethal.”

She said her return on investment for her International MBA was immediate and was recouped within a year working at Cisco.

Christeson said while running Argent has been rewarding, it’s also been one of the hardest things she’s ever done. It takes resilience, commitment and networking, she said, adding that entrepreneurs have to have conviction in what they’re building.

Christeson said Argent has yet to make a profit because she is growing into future demand by expanding offerings, but she has big plans for her company and hopes to be profitable within two years.

While expanding Argent is more than a full-time job, Christeson also is raising a family. She has been married to her husband David, a marketer for Apple, for seven years, and they have a 1-year-old son.

Being a working mother trying to maintain her company’s momentum makes Christeson more relatable for Argent customers, many of who are also balancing families with careers.

“I think becoming a mother has made it easier to understand a large part of our community,” she said. “It’s allowed me firsthand understanding of the challenges working moms face, and I try and incorporate those learnings into Argent’s offerings.”

Christeson said she wants Argent to be more than just clothing. Argent’s two current stores in San Francisco and New York feature co-working spaces where women can jump on their laptop and use private phone booths. Argent also offers workshops with skill-building programming such as negotiation training and financial planning.

Argent is in the process of opening another store in Washington, D.C., and hopes to open one in Los Angeles this fall. All of their items are also available on their website: argentwork.com. 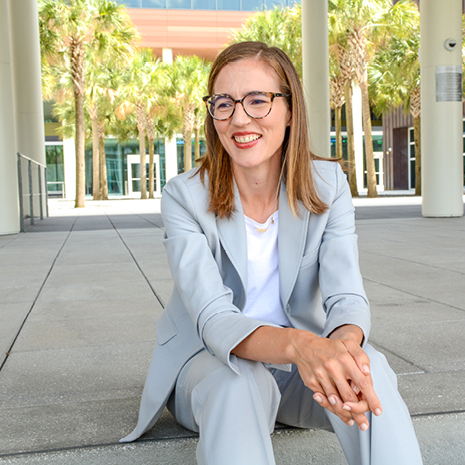 Moore School alumna Sali Christeson is making her mark on the women's workwear world with her stylish yet functional brand, Argent.