High profile sports events have been identified by the Department of Homeland Security as potential terrorist targets (Lipton, 2005). According to Webb (2007), college sports events attract huge crowds and are an inviting terrorist target for mass casualties and media coverage. In addition to terrorism, sport facility managers are concerned with inclement weather, alcohol problems, and crowd management issues (Fried, 2005). However, previous research indicates a lack of training and education for key personnel responsible for responding to emergency incidents at college sports events (Baker, Connaughton, Zhang, & Spengler, 2007; Beckman, 2006; Cunningham, 2007; Hall, 2006). The purpose of this exploratory study was to determine the needs, concerns, and future challenges in security management at National Collegiate Athletic Association (NCAA) Division I football events. The population for this study was limited to NCAA Division I intercollegiate athletic facility managers (n=235). Athletic facility managers have been identified as one of the key personnel responsible for security management operations at college football events (Hall). A total of 83 complete surveys were returned for a 35.4% response rate. The survey obtained general information on the institution, football game day operations information, and a security management needs assessment. Findings determined that 61% of the institutions outsourced their security, fire, and medical personnel. Several key areas of need identified by Division I football athletic facility managers included: 1) access to timely security information to help prevent, detect, and respond to incidents, 2) assistance in conducting vulnerability assessments, 3) emergency response training, and 4) the provision of crowd control workshops. Assessing needs will assist athletic departments in their future 3 planning of security systems and implementation of staff training and education. This promotes a safer environment for players, spectators, officials, and local community stakeholders.

On September 11, 2001, a series of terrorist attacks changed the external environment of sports forever. In a post 9/11 world, college athletic administrators are now much more concerned with ensuring effective security management operations at their sports events (Baker et. al, 2007). College sports venues host millions of spectators providing an attractive terrorist target for mass casualties and media coverage (Webb, 2007). According to the NCAA Official Records Book (2007), approximately 48 million spectators attended NCAA football games during the 2006 season. The most notable terrorist-related incident at a college football event occurred in October 2005 when a University of Oklahoma student suicide bomber detonated his device outside an 84,000 seat stadium (Hagmann, 2005).

In addition to terrorism, sport facility managers are concerned with inclement weather, alcohol problems, and crowd management issues (Fried, 2005). In February 2008, the NCAA Division I Football Committee convened to discuss an increased emphasis on crowd control during all rounds of the championship (Johnson, 2008). Committee members are empowering on-field officials to stop a game when the safety of participants and fans is compromised because of an incident. The NCAA (2008) is also proposing that institutions who fail to manage crowd control could lose the chance to host postseason games. Several incidents in recent years have contributed to the increased concern for fan and player safety. In February 2007, the Southeastern Conference fined Vanderbilt $25,000 after its fans rushed the basketball court after upsetting No. 1 Florida. During that same incident a Florida Gators freshman student-athlete was 4 caught on camera punching a Vanderbilt fan (Diamond, 2007). The Florida International-Miami football game on-field altercation in October 2006 took two dozen police officers to control and resulted in 31 player suspensions (Associated Press, 2006). In September 2005, Louisiana State University (LSU) fans pelted beer bottles at a University of Tennessee bus after the Volunteers came from behind to defeat the Tigers in overtime (Associated Press, 2005).

Natural threats in the form of inclement weather have caused devastation to sports programs in recent years. Hurricane Katrina affected many professional and college sports programs in the Gulf Coast region and New Orleans area. The New Orleans Saints played home games in three different cities during 2005 and the Hornets resided in Oklahoma City for the 2005-2006 season (Matheson & Baade, 2006). Louisiana State University is still dealing with the financial impact of Hurricane Katrina. The athletic department lost or paid other schools approximately $3.5 million, plus an additional $400,000 for on-campus facility damage (Steinbach, 2006).

Organizations should attempt to prevent or deter potential threats due to legal obligations, business continuity issues, and reputation issues (National Counter Terrorism Security Office, 2006). In the event of an incident, written security plans, such as risk management, emergency response and evacuation plans may come under scrutiny. Stadium owners/operators have a duty of care to provide a reasonable level of safety to a sport spectator considered a business invitee (Carpenter, 2000). Sauter and Carafano (2005) emphasized the importance of business continuity planning as organizations must have contingency plans in place in the event of an incident and possess the capabilities and financial resources to return business operations to normality as soon as possible. Loss of reputation is another major concern for management. The sporting public or local community may not trust the sport organization in the future if the facility does not react well to crises. This can have negative financial repercussions.

The purpose of this exploratory study was to determine the needs, concerns, and future challenges in security management at NCAA Division I college football events. Identifying security management needs will assist athletic departments in future planning of security systems and in the implementation of staff training and education. This ultimately will promote a safer environment for players, spectators, officials, and local community stakeholders.

There are approximately 1,055 NCAA Division I, II, and III institutions in the United States (NCAA.org, 2008). During the 2006 football season, approximately 48 million spectators attended NCAA football games (NCAA Official Records Book, 2007). The NCAA has issued a “Security Planning Options” document to assist institutions in their security planning for sports events. However, no sport event security standards currently exist for U.S. colleges. Therefore, security measures at these venues vary across the nation (Hall, 2006). In addition to the lack of consistent measures at college sport venues, there are no sport-specific event-security training and education programs available to athletic facility managers (Hall).

According to Cunningham (2007), 62% of assistant athletic directors for facilities at Division I football schools reported having no formal training, education, or certifications in event security management. Baker et. al (2007) reported similar findings while conducting a study of risk management practices at Division I-A schools. Nearly half (47%) of all respondents have not received training to guard against terrorist attacks at their facilities, even though managers for NCAA Division I-A football stadiums strongly agreed (M=4.26 on a 5-point Likert Scale) that terrorism is a foreseeable threat to U.S. sport facilities (Baker et al).

A Delphi study by Hall (2006) identified standards for effective security management at college sport venues. Training of key personnel emerged as a critical requirement and should be provided to ushers, vendors, and volunteers in the following areas: threat assessment, inspection procedures, credential recognition, and security awareness. Beckman (2006) also identified a need for staff training for event-security personnel. Webb (2007) noted that training key personnel responsible for decision-making on college campuses is an issue. Training in threat assessment and analysis is needed in order to ensure proper response and intervention to an incident. Training should include senior campus administrators, security and law enforcement leaders, risk managers, and communication specialists (Webb).

As evident from the current threats collegiate sport administrators face (Farmer, Mulrooney, & Ammon, 1996; Fried, 2005; Lipton, 2005), they must continue to plan and implement effective security management programs. However, previous research indicates there is a lack of planning and training of key personnel responsible for security management of college sporting events (Baker et. al, 2007; Beckman, 2006; Cunningham, 2007; Hall, 2006). This study explores the needs of intercollegiate athletic facility managers as they attempt to effectively secure their sport venues. Furthermore, it will determine whether there is a demand for training and education to meet the industry gap previously identified.

The population for this study was limited to NCAA Division I (n=235) intercollegiate facility managers responsible for the security operational planning and preparedness for college football events. Intercollegiate athletic facility managers are responsible for football game day operations and they coordinate with multiple agencies in the community to ensure effective security management systems are established (Hall, 2006). A total of 83 surveys were returned for a 35.4% response rate.

The survey instrument was developed by a panel of security experts who have backgrounds as academics and / or practitioners. Academic experts included individuals with a record of research in sport-event security management. Field-based professionals included individuals with experience in intercollegiate game-day security operations, representative of athletic facilities, campus police, and emergency management services. The panel made suggestions regarding questions to be included, added, or omitted. They were also able to determine whether the selected questions were relevant and understandable. After the initial review, three additional experts reviewed the survey to ensure content validity.

After obtaining Institutional Review Board approval, surveys were distributed via U.S. mail to all NCAA Division I intercollegiate athletic facility managers (n=235). Participant information was obtained from the NCAA website. No incentive was offered for participation and participants were ensured anonymity. Questionnaires were analyzed using SPSS (version 11.0). Descriptive statistics and frequencies were recorded.

Survey participants were responsible for managing football stadiums with a capacity of 2,000 to 102,000 spectators with an average capacity of 50,178. Attendance at football events ranged from 1,500 to 104,000, with an average attendance of 39,287. The average number of game-day personnel working football games at Division I institutions were 580. Participants were asked to indicate whether these game-day personnel were volunteers, hires from within the institution or were provided by an outsourced private firm. Figure 1 depicts the outsourcing of game day staff including security, fire, and medical personnel, ticket sellers, ticket takers, ushers, concessionaires, and souvenir personnel. Sixty-one percent of Division I intercollegiate athletic programs outsourced their security, fire, and medical personnel. However, over half (54%) of Division I programs hired ticket sellers, ticket takers, and ushers from within the institution. 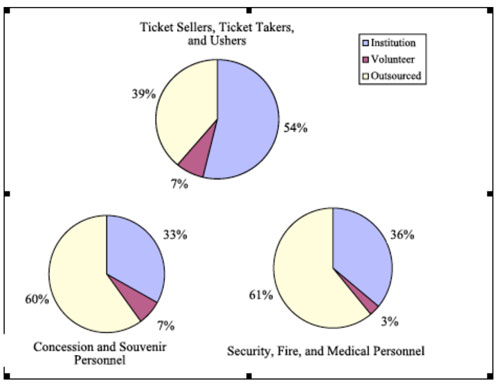 Findings also determined that 61% of the security, fire, and medical personnel are outsourced, and 54% of ticket sellers, ticket takers, and ushers are hired either from within the institution or the local community. Whether staff are hired from within the institution, outsourced to a private contractor, or comprised of local volunteers, college athletic departments need to control the quality of personnel to oversee game-day security activities. Unfortunately, there are no standardized training and education requirements for support staff at college sport venues across the United States (Hall, 2006). Sport governing bodies need to address the lack of training and education and discuss the prospect of implementing standards, rules, and regulations to ensure effective and consistent security management of sport events.

In conclusion, intercollegiate athletic facility managers at NCAA Division I institutions identified a need for training, information sharing, and emergency preparedness to prevent, respond, and recover from incidents at sporting events. However, an industry gap currently exists to meet their training and education needs. The industry needs to work to produce future sport managers with adequate training in facility-security operations, determine adequacy of training provided by outsourced contractors, develop a certification for all intercollegiate athletic facility managers and security support staff working college football events, and develop an information sharing and analysis center (ISAC) for intercollegiate athletic staff to ensure access to timely and accurate security information.

Based on this study, the following recommendations are provided for Division I college athletic programs: