For the twelfth year in a row, there is a significant gap between FBS football players’ graduation rates and those of full-time male students. The 2021-22 Power-5 Conferences’ AGG remains sizable and significant at -19.1, the third straight year of an increasing gap, with the Group-of5’s AGG of -12.1, reflecting an increased gap of 3.2 percentage points from the previous year.

It is worth noting the potential impact of both the global COVID-19 pandemic and the transfer portal on AGGs. The current 4-class cohort includes a 2020-2021 graduating class that was significantly impacted by COVID-19 disruptions. Additionally, the transfer portal has triggered an influx of transferring athletes. Since the Federal Graduation Rate (FGR) retains transfers as part of a school’s cohort, in all likelihood this increase in transferring athletes increases the number of “left eligible” players, decreasing the number of players graduating, which is reflected in greater AGGs.

While in the twelve-year history of the AGG the gap between FBS football players’ graduation rates and those of full-time male students has been consistently large, more research is needed to determine the cause(s) of the largest one-year FBS AGG increase.

(See tables and chart in appendix for additional information)

In 1990, Congress mandated full disclosure of graduation rates at schools that award athletically related aid and receive federal financial aid. The Federal Graduation Rate (FGR) reflects the percentage of students (athletes and non-athletes) who graduate within six years from the school where they initially enrolled as a full-time student. The FGR measures the extent to which colleges and universities retain and graduate recruited athletes, thus providing one measure of whether they are fulfilling the NCAA’s mission of maintaining athletes as an integral part of their student body. The strength of the FGR is its focus on student retention. Another useful graduation rate measure, created by the NCAA to track athletes, is called the Graduation Success Rate (GSR). The GSR excludes from its calculation athletes — including transfers — who leave a particular school prior to graduating (i.e., early), while in good academic standing. The NCAA methodology also includes athletes who transfer into an institution in a program’s GSR. The GSR recognizes college athletes may take a different path to graduation than other full-time students. However, a limitation of the GSR is that currently no comparable “graduation” rate exists for the general student body. In other words, the GSR and FGR measures are not comparable. The NCAA created the GSR to correct the FGR’s tendency to underestimate graduation rates by treating all college transfers as non-graduate dropouts. Unfortunately, the GSR correction causes it to overestimate athlete graduation rates. In effect, it treats all athletes meeting minimal eligibility requirements who leave college before graduation as transfers who graduate, ignoring that many transfers drop out and never graduate.

The AGG was developed to partly address FGR and GSR limitations. The AGG compares an adjusted FGR for full-time students and the reported FGR for college athletes. Reports for each sport are released at various times during the year.

CSRI believes in the full disclosure of all measures pertaining to college athlete graduation, including the FGR, GSR, and AGG since one measure is not “better” or somehow “fairer” than the others as each measure different things. The FGR focuses on an institution’s ability to retain and graduate students it admits, while the GSR attempts to account for athletes who leave a school that initially admitted them.

Historically, standard evaluations of NCAA athlete graduation rates have involved comparisons with general student body rates presumed to pertain to full-time students. However, many schools’ general student body rates include a significant number of part- time students. This is problematic because all NCAA athletes must be “full-time” and should therefore be compared with other full-time students. The downward “part-timer bias” in the student-body FGR distorts this comparison. Because part-time students take longer to graduate, this significantly reduces the measured general student-body FGR, making the relative rate of college athletes at many schools and conferences appear more favorable. CSRI’s Adjusted Graduation Gap methodology addresses this “part-timer bias” using regression-based adjustments for the percentage of parttime students enrolled at an institution.1 The adjustments also account for the aggregate influence of school-specific factors such as location and student demographics. These estimates then become the basis for the AGG comparison. 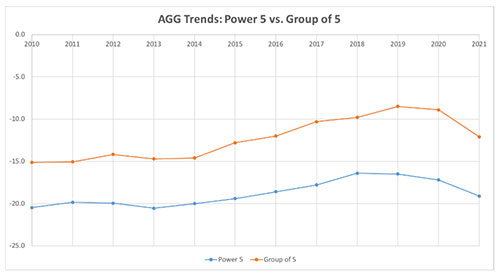 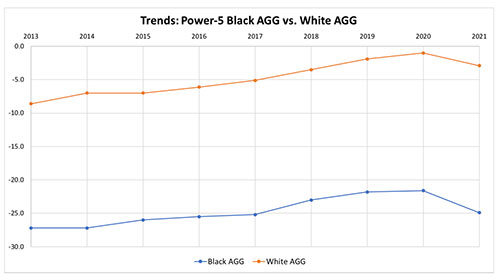 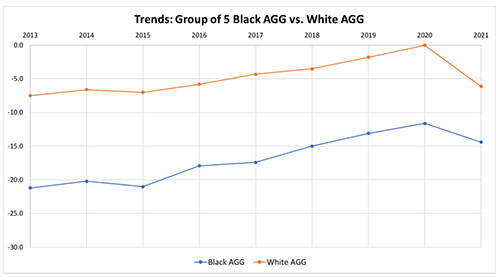 The College Sport Research Institute (CSRI) is housed within the Department of Sport and Entertainment Management at the University of South Carolina – Columbia. CSRI is dedicated to conducting and supporting independent data collection and analysis related to college sport issues. Along with conducting and disseminating in-house research on college athletes’ graduation rates, post-athletic transition issues, oscillating migration patterns, and college-sport broadcast content, CSRI hosts the annual CSRI Conference on College Sport in Columbia, South Carolina, which provides a forum for dissemination of research on current college-sport issues and possible solutions to these challenges. CSRI also publishes a peer-reviewed scholarly journal entitled Journal of Issues in Intercollegiate Athletics (JIIA), which provides an additional outlet for research related to college-sport issues. This is the twelfth-annual installment of the CSRI’s DI basketball AGG Report.

We hope this information encourages continuing research and discussion regarding both graduation rates and the quality and type of educational opportunities offered college athletes.