Columbia, SC — January 29, 2019… The College Sport Research Institute (CSRI) at the University of South Carolina in Columbia, SC, released its ninth-annual National Collegiate Athletic Association (NCAA) Football Bowl Subdivision (FBS) Football Adjusted Graduation Gap (AGG) report today. Not surprisingly, given their nearly singular focus on qualifying for the College Football Playoff (CFP), the CFP Top-10 has a cumulative AGG of -25.5. The cumulative AGG for CFP Top-10 Black players is -30.8, while the cumulative AGG of White players on CFP Top-10 rosters is only -9.2 (See Table 2 in appendix.).

For the ninth year in a row, there is a significant discrepancy between FBS Football players’ graduation rates and those of full-time male students. The 2018 Power-5 Conferences AGG mean remains sizable and significant at -16.4, while the Group-of-5’s AGG average is -9.8.

It should not be overlooked that overall Power-5 AGGs do show a (weak) improving trend (about 0.8 points per year) over the last five years (See Chart 1 below.). However, if this progress continues at its current rate, it will take 20 years for negative P-5 AGGs to disappear. In addition, 65 years after Brown v. Board of Education, it is notable that improvements in AGG trends are mostly attributable to decreases in the AGGs of White P-5 players. This year’s AGGs continue to reflect staggeringly dissimilar graduation outcomes for Black and White FBS football players (especially in P-5 conferences and CFP Top-10): This year’s overall AGG of Black Power-5 players is -21.8, compared to -1.9 for White players, an almost 20-point difference.

The continuing large discrepancy between Black and White Power-5 AGGs should be cause for concern and embarrassment among academic administrators, athletic department personnel, commentators, and politicians who profess concern for the educational welfare of big-time NCAA profit-athletes.

Historically, standard evaluations of NCAA athlete graduation rates have involved comparisons with general student body rates presumed to pertain to full-time students. However, many schools’ general student body rates include a significant number of parttime students. This is problematic because all NCAA athletes must be “full-time” and should therefore be compared with other full-time students. The downward “part-timer bias” in the student-body FGR distorts this comparison. Because part-time students take longer to graduate, this significantly reduces the measured general student-body FGR, making the relative rate of college athletes at many schools and conferences appear more favorable. CSRI’s Adjusted Graduation Gap methodology addresses this “part-timer bias” using regression-based adjustments for the percentage of part-time students enrolled at an institution. The adjustments also account for the aggregate influence of school-specific factors such as location and student demographics. These estimates then become the basis for the AGG comparison. 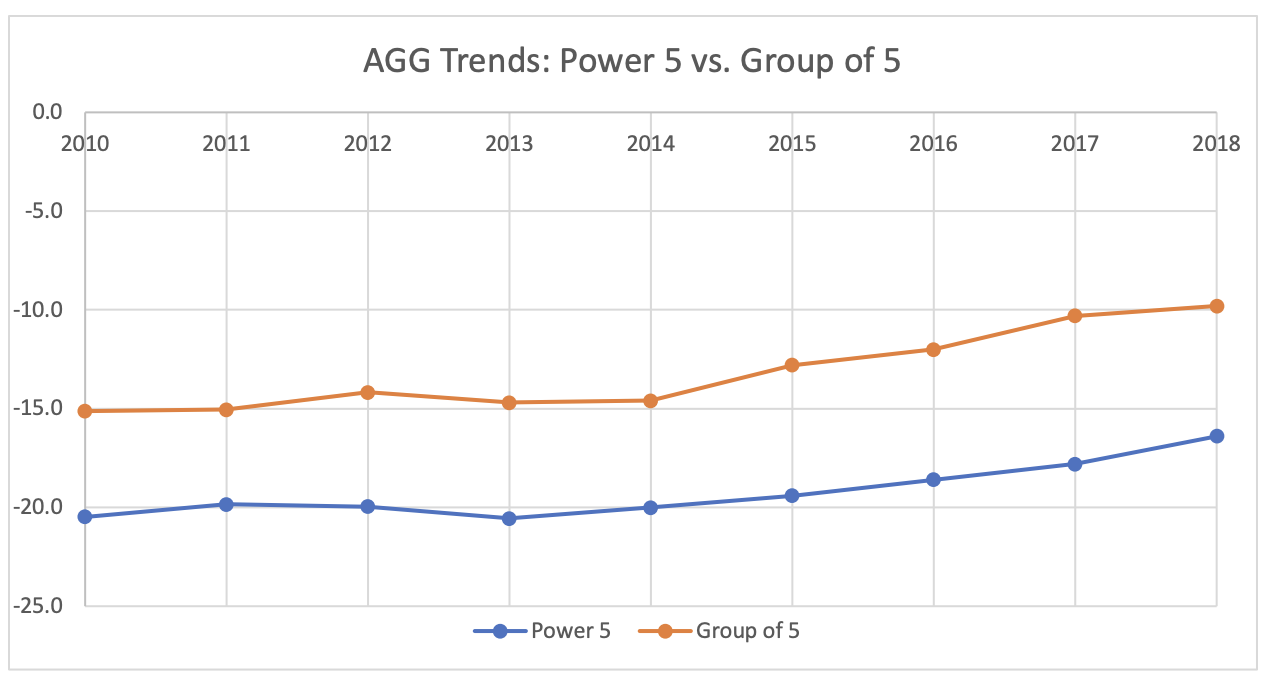 The College Sport Research Institute (CSRI) is housed within the Department of Sport and Entertainment Management at the University of South Carolina – Columbia. CSRI is dedicated to conducting and supporting independent data collection and analysis related to college — sport issues.

Along with conducting and disseminating in---house research on college athletes’ graduation rates, post-athletic transition issues, and oscillating migration patterns, CSRI hosts the annual CSRI Conference on College Sport in Columbia, SC. This conference provides a forum for research of current college---sport issues and possible solutions to these challenges. CSRI also publishes a peer- --reviewed scholarly journal entitled: Journal of Issues in Intercollegiate Athletics (JIIA), which provides an additional outlet for research related to college--- sport issues. This is the ninth-annual installment of the CSRI’s AGG FBS Football Report. We hope this information encourages continuing research and discussion regarding both graduation rates and the quality and type of educational opportunities offered college athletes.