Columbia, SC — October 21st , 2015… The College Sport Research Institute (CSRI), at the University of South Carolina in Columbia, SC, released its sixth-annual NCAA Division-I Football Adjusted Graduation Gap (AGG) report today. This report provides an overview of the AGGs of Black and White Division-I football players as well as a six-year longitudinal view of “All AGGs” for Division-I conferences sub-divided into “Power Five” and “Other FBS” categories.

The College Sport Research Institute’s Adjusted Graduation Gap (AGG) analysis of NCAA Division I football players’ graduation rates reveals that overwhelmingly these athletes do not graduate at rates comparable to other full-time students at their universities.

(See tables and chart in Appendix)

Another useful graduation rate measure, created by the NCAA to track athletes, is called the Graduation Success Rate (GSR). The GSR excludes from its calculation athletes — including transfers — who leave a particular school prior to graduating (i.e. early), but in good academic standing. The NCAA methodology also includes athletes who transfer into an institution in a program’s GSR. The GSR recognizes college athletes may take a different path to graduation than other full-time students. However, a limitation of the GSR is that currently no comparable graduation rate exists for the general student body. In other words, the GSR and FGR measures are not comparable.

The AGG was developed to address FGR and GSR limitations. The FGR focuses on an institution’s ability to retain students it admits, while the GSR attempts to account for athletes who leave a school that initially admitted them. The AGG compares an adjusted FGR for full-time students and the reported FGR for college athletes from the following NCAA Division-I sports: FBS football, D-I men’s and women’s basketball, and D-I softball and baseball. Reports regarding each sport are released at various times during the year.

Historically, standard evaluations of NCAA athlete graduation rates have involved comparisons with general student body rates presumed to pertain to full-time students. However, many schools’ general student body rates include a significant number of parttime students. This is problematic because all NCAA athletes must be “full-time” and should therefore be compared with other full-time students. The downward “part-timer bias” in the student-body FGR distorts this comparison. Because part-time students take longer to graduate, this significantly reduces the measured general student-body FGR, making the relative rate of college athletes at many schools and conferences appear more favorable. CSRI’s Adjusted Graduation Gap methodology addresses this “part-timer bias” using regression-based adjustments for the percentage of part-time students enrolled at an institution. The adjustments also account for the aggregate influence of school-specific factors such as location and student demographics. These estimates then become the basis for the AGG comparison. 1

*Yearly conference realignment many affect these numbers. Conference means for each year are based on conference membership for that year.

*Yearly conference realignment many affect these numbers. Conference means for each year are based on conference membership for that year. 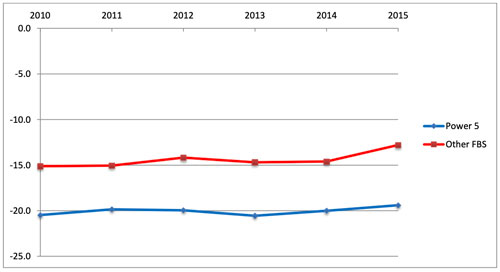 The College Sport Research Institute (CSRI) is housed within the Sport and Entertainment Management Department at the University of South Carolina – Columbia. CSRI is dedicated to conducting and supporting independent data collection and analysis related to college sport issues.

Along with conducting and disseminating in-house research, CSRI holds the annual Conference on College Sport in Columbia, SC. This conference provides college-sport scholars and intercollegiate athletics practitioners a forum to present research related to current college-sport issues and discuss possible solutions to these challenges. CSRI also publishes a peer-reviewed scholarly journal entitled: Journal of Issues in Intercollegiate Athletics (JIIA), which provides an outlet for research related to college-sport issues.

This is the sixth annual installment of the CSRI’s Adjusted Graduation Gap (AGG) Report. We hope this report encourages continuing research and discussion regarding college athlete graduation rates, as well as a focus on the quality and type of educational opportunities offered to college athletes.