What was it like to work Super Bowl LV? Alumna Logan Hudson shares her experience

University of South Carolina alumna Logan Hudson experienced Super Bowl LV from a perspective few others will ever have. Just a few years after graduating with her undergraduate and graduate degrees in sport and entertainment management, she helped put on one of the biggest events in all of sports. As event coordinator at Raymond James Stadium, the site of the big game this year, Hudson spent months preparing for what proved to be a uniquely successful Super Bowl Sunday.

The College of Hospitality, Retail and Sport Management alumna shares her perspective on what it was like to help pull off the first, and hopefully last, Super Bowl to be held during a pandemic.

Hudson:
Because the Super Bowl brings in so many different vendors and outside contractors, our operations department split up responsibilities. My main role for about six months leading up to the Super Bowl was credentialing all stadium staff (apart from security and concessions). This was an extremely large task and I ended up with around 1,000 credentials total.

Apart from credentialing, I was the stadium point of contact for the décor company who placed all banners, fan cut outs, signage, etc. I was also the point of contact for all training sessions that took place in our West Club area. These training sessions were held for weeks leading up to the Super Bowl and included security training as well as production meetings with CBS, the broadcast network for the game.

The two weeks leading up to the game were the busiest and most intense weeks of work I have ever experienced. For 14 days straight we all worked 10+ hour days. Credentialing was at an all-time high and getting the building ready for an event of this magnitude was extremely time consuming.

COVID-19 made things even more difficult. The pandemic threw curveballs at us every single day. Almost all meetings were virtual, and the need for safety precautions added another level of preparation.

The day before the game, we had to place signs in every seat, which took our entire staff as well as volunteers about 6 hours to complete. Once that was done, we then had to survey every aspect of the building to ensure it was game ready by the time we left Saturday night.

Super Bowl Sunday started a lot differently than anyone expected. We had storms roll in around 4 a.m. in the morning, causing a shelter in place order and shutting down all entries to the stadium from 5 a.m. until 6:30 a.m. This caused all early staff to have to wait in their cars for an hour and a half prior to entry.

Once we got the all-clear, it was all hands on deck, making sure standing water was taken care of and everything blown over in the storm was replaced. Like I said, during the hours leading up to the game, we were putting out fires as they came up.

Once the gates opened and the game began, operations were mostly shifted to customer service and simply walking the building to ensure things were running smoothly.

After overseeing halftime talent movements, all efforts then shifted to setting the gates for egress.

With the Buccaneers looking like they were going to win the game, we had to really shift our thinking to ensure it was a secure and safe egress of fans with the Buccaneers being the home team. The entire third and fourth quarter were spent preparing for the exit.

Exhausted doesn’t even begin to describe the feeling that night. Super Bowl LV was in the books.

Working at the Super Bowl was one of the best experiences I have ever had in my entire life. I met so many amazing people from all over the country and that has led to a lot of networking opportunities. I hope this is just the beginning of my contribution to the Super Bowl as well as other major events.

I want to express my gratitude to the University of South Carolina and Sport and Entertainment Management Department. Without that program and its amazing faculty who care so much about their students, I would not be where I am today. 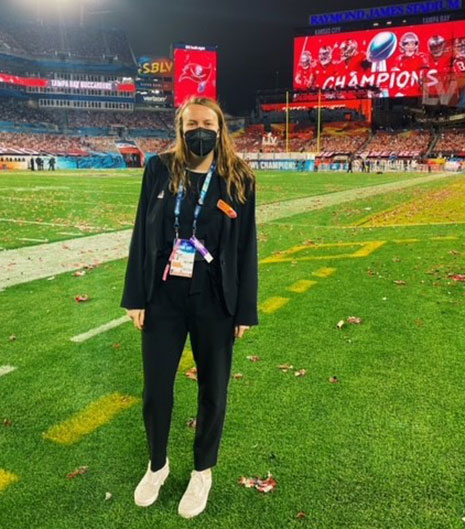 Logan Hudson earned two degrees from South Carolina: her bachelor’s in sport and entertainment management in 2018 and her master’s in the same subject in 2019. While a student, she gained experience working big events including the Masters golf tournament and the 2018 U.S. Youth Soccer Southern Regionals. She also worked as a graduate assistant in the Department of Sport and Entertainment Management, learning from industry legends on the faculty. Her hard work led to an operations assistant internship with the Tampa Sports Authority, followed by a promotion in February 2020 to her current position.