When Colin Kaepernick, then a player with the San Francisco 49ers, knelt during the national anthem in 2016, it set off a Twitter storm like few others and began a polarizing debate and movement which continues three years later. But, unbeknownst to many social media users, automated robot accounts have been secretly helping to fuel the fires.

University of South Carolina sport and entertainment management researcher Grace Yan led a recent study examining the activity of bots in the Twittersphere of the National Football League anthem protest, also known as the Take A Knee movement. Together with co-authors Nicholas Watanabe of South Carolina and Ann Pegoraro of Laurentian University, the team found extremist groups on both ends of the spectrum using bots to drive their side of the controversy — an effort symptomatic of a larger political atmosphere and far beyond a single protest.

“Bots in the digital sphere of athlete protests is not to be treated as an innocuous phenomenon, but one that engages in broader, ongoing social struggle of our time,” says Yan, an assistant professor with South Carolina’s Department of Sport and Entertainment Management. “Sports provide the perfect social media playing field for social issues because they are so tied to tradition, identity and culture. People are deeply connected to teams, athletes and what they represent, so it is a complex issue that has implications for teams, athletes and fans who might all be getting caught up in a much bigger competition of manipulation.”

The researchers chose to examine bot activity in the anthem protest because it drew such widespread attention (including a speech from President Donald Trump and a counter-protest from Vice President Mike Pence) that it became an iconic platform for civil rights debates and a clear example of “gatekeeping.”

Gatekeeping, in the context of bot research, is the question of who and what determines the information that influences the public arena. Bots can flood that arena with misleading or false information and artificially augment perceived differences in social and cultural groups.

The anthem protest is a sample of the much larger picture of bot use to drive engagement in what Watanabe calls an “attention economy,” a world where sports, pop culture and politics are intertwined. According to the research, the influence of bots to spread dissension through promotion of extremist agendas is not an isolated phenomenon, nor a fading one.

The researchers examined approximately 3 million tweets from 2,848 accounts, all verified by Twitter as bots associated with the Internet Research Agency. The tweets were posted beginning on August 14, 2016 (the day of Kaepernick’s initial protest) through May 30,2018 (the last day of data collection for the study).

The IRA is a Russian-based “troll factory” with hundreds of employees, 13 of whom were charged in 2018 with interfering with American electoral and political processes. “Bots” and “trolls,” used interchangeably in context of this research, are operated through a combination of automated computational algorithms and human manipulations to perform communicative activities on social media with assumed identities.

From those approximately 3 million IRA bot tweets, the researchers used keywords to identify tweets related to the anthem protest, narrowing down a final data set of 6,923 bot tweets.

The research revealed bot activity tied closely to political events. In the early days of the movement, bot tweets came primarily from left-wing accounts. However, in the week after President Trump made disparaging remarks about the protestors, the activity shifted, with IRA bots generating 2,870 right-wing tweets and just 19 left-wing tweets.

That trend continued and grew, with right-wing bots generating 91% of bot-generated tweets about the anthem protest during the study period. Those tweets seemed to have the primary purpose of delivering false information.

In one stage of the protest, as Yan wrote, “approximately 5,797 out of 5,820 right-troll retweets in this stage were directly linked to one right-wing extremist media, Truth Feed News.” That site has been identified by numerous watchdogs as one which promotes right-wing conspiracy theories and often shares unproven or false information.

The researchers examined why bots are used and who benefits from them and found answers that could have global effects. Creating dissension and stirring anger, the bots can be used to promote agendas, whether driving people to vote for a particular candidate or party or to stay away from the polls entirely, or to join a certain cause or group or even to buy or boycott a certain product.

“Anyone who is consuming, sharing or engaging with information on social media needs to be vigilant that they are not becoming the victim of a propaganda system of fake accounts,” says Yan. “Beyond getting people unnecessarily aggravated about issues that might not be as polarizing as they appear, the negative impacts can be as serious as inciting violence, costing people their careers and changing the course of political history.”

The full study, "Examining IRA Bots in the NFL Anthem Protest: Political Agendas and Practices of Digital Gatekeeping," was published in the journal Communication & Sport and is available online. 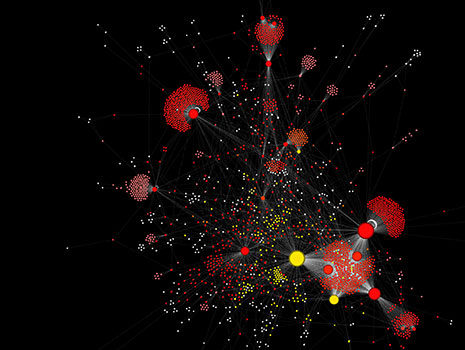 BOTS AND THEIR INFLUENCE

Above:
Graph of #NFLBoycott on 09/22, after President Trump gave a speech about the anthem protests.

Banner image top of page:
Graph of the #TakeAKnee network on 09/23, emerging as a counter to the #NFLBoycott Tweets.

The full study, "Examining IRA Bots in the NFL Anthem Protest: Political Agendas and Practices of Digital Gatekeeping," was published in the journal Communication & Sport and is available online.