The Washington Capitals’ colors are red, white and blue, but behind the scenes with the newly crowned NHL champions, you’ll find plenty of garnet and black.

While the players on the ice focused on overcoming long-time nemesis Pittsburgh and upstart Las Vegas in the run to the Stanley Cup, University of South Carolina alumni like Mark Cormack, John Cosgrove, Laura Doyle and Dave Marin were providing support off the ice using the skills they gained while studying at UofSC’s College of Hospitality, Retail and Sport Management.

The college attracts many students who are passionate about having a career in sport, preparing them for jobs that don’t require skating speed, a good slap shot, or any other athletic skills.

Marin, who earned his bachelor’s degree in sport and entertainment management in 2007, has spent his entire career in hockey. He accepted an assistant equipment manager position with the Columbia Inferno after graduation. After two years with the minor league team, he made the jump to the NHL with the Capitals.

Marin is now the Caps’ equipment assistant. He serves as the dressing room manager for teams visiting the Capitals, and assists his co-workers with day-to-day equipment and locker room maintenance. After a decade of success with the team, Marin joined them on the ice after the championship-clinching win and was among those who lifted the Stanley Cup high in celebration.

"Winning a Stanley Cup with the Capitals has been a dream come true," Marin says. "My time at USC and in the HRSM program laid the groundwork for me professionally. There have been a lot of people who have helped me along the way in my career, but none have been more valuable than my education at Carolina."

The Capitals are also fueled by another Gamecock alumnus. John Cosgrove holds two degrees from South Carolina, earning his bachelor’s in hospitality management in 2004 and his master’s in international hospitality and tourism management the following year.

Cosgrove founded Eco Caters DC in 2012, and the company is now in its sixth year as official caterer for the team. Cosgrove combined his passion for hospitality and sports by providing healthy, high-energy catering options that are ideal for the athletic market.

"Working so closely with the Washington Capitals has been an impactful life experience," Cosgrove says. "This group of players, staff and coaches have been very gracious and made me feel like part of the team. While collaborating with team doctors, nutritionists, strength and conditioning coordinators, coaches and players, I have learned so much about performance-based nutrition and what it takes to fuel the best athletes in the world. Having a master's degree from USC was very beneficial to my professional success. What I learned in HRSM, both hands-on and in the classroom, prepared me for the dynamic schedules, professional atmosphere and high exposure business of working in partnership with an NHL franchise."

No professional sports team can succeed on the ice (or field or court) without money, and generating revenue for the Capitals and other Washington franchises is the job for Mark Cormack (pictured in banner above).

Cormack, who graduated from UofSC in 2010 with a bachelor’s degree in sport and entertainment management, is now manager of corporate sales for Monumental Sports and Entertainment, responsible for selling VIP season tickets, full and partial ticket plans, suites and individual game tickets.

Among Cormack’s co-workers with Monumental is fellow Gamecock Laura Doyle, guest relations manager for Capital One Arena, home of the Capitals.

Doyle’s duties are truly monumental (pun intended). She oversees guest relations staff and operations, including security, for all events at the 20,000-seat arena which is also home to Washington’s NBA, WNBA and Arena Football League teams, as well as Georgetown University men’s basketball.

Her responsibilities include enhancing and planning event security, medical needs, logistics, billing and guest relations for events at Capital One Arena. The 2008 sport and entertainment management graduate has certainly done her part to bring home the Cup.

Last but not least, current USC students in the College of Hospitality, Retail and Sport Management are learning from a former pro sport executive who knows the Capitals well.

Sport and Entertainment Management Senior Instructor Susan O’Malley interned with the team early in her career. Later, as president of Washington Sports and Entertainment, she ran the building where the Capitals play (now known as Capital One Arena). She teaches courses on sport and venue management and live entertainment marketing, providing students with valuable opportunities to hear advice and best practices from an industry trail blazer.

“There are so many career sectors throughout sport and entertainment,” says Haemoon Oh, dean of the College of HRSM. “Whether a student is interested in ecommerce, sport management or hospitality — they can match their talent with something they love and take it to the championship level. That’s what makes our industries so exciting.” 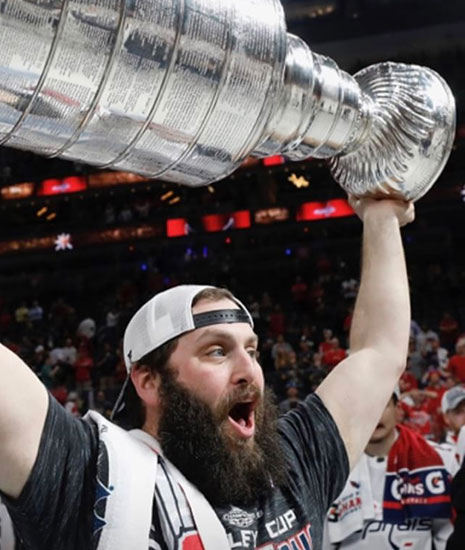 After a decade of success with the team, Marin joined the Washington Capitals on the ice after the championship-clinching win and was among those who lifted the Stanley Cup high in celebration. Marin serves as the dressing room manager for teams visiting the Capitals, and assists his co-workers with day-to-day equipment and locker room maintenance.