Every day and night for a month and a half leading up to the Siemens Healthineers Innovation Think Tank’s annual external exhibition, Kevin Gagnon worked. From 8 a.m. to 5 p.m., he went to his internship with Capital One. At night, he scarfed down a dinner and then went back to work developing a functional app for the upcoming eITT competition.

The work wasn’t something that he had to do. The competition itself asked for ideas in the health care sector, not finished products, and just days before, one of his team’s advisors had suggested not building the complete app. But only doing part of the job wasn’t in Kevin or any of his team members’ natures, and quietly, they decided to fully build out the stroke identification app for their trip to Germany.

“It really ignited my passion and Kevin’s passion,” says Jack Gabel, one of the team members and a biology major at the University of South Carolina. “We were working around the clock to fully invest in our project.”

When the team arrived with a complete app in Erlangen, Germany, their advisor Ben Schooley wasn’t surprised in the slightest. Despite having told them a month earlier that they should focus on developing just one portion of their idea, he knew after working with the team for the past five months that they would not stop at anything but the best.

“They are overachievers, they work really hard, they were really excited, and I wasn’t going to hold them back,” says the associate professor in the UofSC College of Engineering and Computing.

In the end, the late nights leading up to the competition made all the difference. Thirty teams from countries and universities across the world had been accepted to eITT 2019. And while their ideas were innovative, exciting and complex, no other team had a working prototype to show their idea in action like the team from South Carolina.

“The extent to which they developed out their concept to be a really working, functional prototype was above and beyond most of what we saw there,” Schooley says. “There were a lot of basic prototypes and really good concepts and really innovative ideas, but theirs worked and they got to show it working from beginning to end all the way through, not just one piece or one part.”

The team itself happily points out the difference their hard work made, with Gagnon calling the app a “leg up” on the competition and a major reason for the team’s victory at the eITT competition.

Now that the team has had time to let their victory sink in, they are shifting their eyes to the future and trying to understand the app’s true potential. Their hope is that it fills a necessary gap in the health care field between providers and patients by giving providers the data they need and offering patients information that they can understand. Using machine learning, artificial intelligence and computer vision, the team believes the solution to this age-old gap comes in the form of cutting-edge technology.

“Being able to put something in someone’s hands is very impactful because, guess what, most people have smart phones nowadays,” says Nick Patel M.D, the chief digital officer/vice chair for innovation in Prisma Health’s Department of Medicine and another advisor to the team. “Most people spend more time on their smart phones than their desktops. You have to meet the patients where they are.”

The students are continuing to work with their mentors, Patel and Schooley, and they plan to keep working in the UofSC Innovation Think Tank Lab under the guidance of Dilek Akgun, the lab’s director of operations and an advisor to the students throughout the process, and Neset Hikmet, a professor of integrated information technology at UofSC. They have started adjusting the app based on the feedback they received in Germany and are hoping to release it to the public soon.

“If you have the passion for a project and you believe in it, you can bring it to fruition pretty quickly,” Gabel says.

Their hope is that more students in the university see what they accomplished and give the UofSC ITT Lab a try. They know that they aren’t the only innovators at the university, and just want other students to step outside of their boundaries, too, and learn the power of interdisciplinary thought.

“We go to school, and we learn a bunch of amazing things,” says Gagnon. “Try using it out, try experimenting with it, and see where it takes you. It could take you to Germany, and it could help solve a bunch of the world’s problems.” 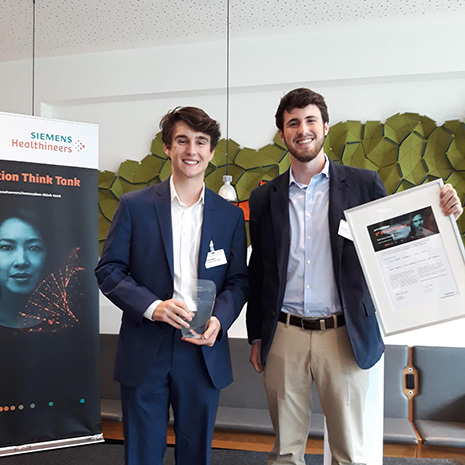 Why join the UofSC ITT Lab?

“If you see an opportunity or topic area that is of interest to you, you do not need to be apprehensive or timid. Take the plunge and just join us and you will find that you are at the right place.”

Hear more from the team's advisor, Ben Schooley on the Innovation on Main Podcast.