Alexander Robinson is the outgoing SIPA president. He handed over the title of president to Owen Donnelly, Clarke Central HS (Georgia), at the 2020 convention March 6-8.

What is your position on staff?
I'm the ODYSSEY's (newsmagazine at Clarke Central HS in Athens, Georgia) sports editor. I manage a staff of three, and together we cover sporting events at our school. I also write a 300-word column for our quarterly newsmagazine.

What is your favorite type of journalism and why?
I *love* political journalism. I find government fascinating and appreciate the ability to constantly stay informed.

What is your favorite type of social media and why?
It used to be TikTok, until it became a Chinese national security risk. Now I'm back to Instagram -- which is fine. I'm not bitter. I'm not bitter at all...

What insipred this year's convention theme "Make Them Listen"?
This era of intense political polarization inspired the SIPA theme. It seems as though people have less respect for objective truth today – something that troubles us deeply. As journalists, we want to reach out to all people and help them understand the world better.

What was your idea behind this year's theme?
My initial suggestion for this year's SIPA theme was "Truth be Told," but I think the theme we ended up with captured the same sentiment pretty well. Both dig at the concept of "truth," something that is often blurred.

What does "Make Them Listen" mean to you?
It means strong, in-depth journalism. We need to do whatever we can to rebuild trust in the press and reach every community. This is something that can start at SIPA through networking and engagement.

How do you plan on "making them listen" in the future?
While I don't plan to pursue journalism as a career, I hope to one day be a public servant and do what I can to leave this world a little better than I found it. In doing so, I want to make it easier for people to listen to one another -- a facet of our theme. 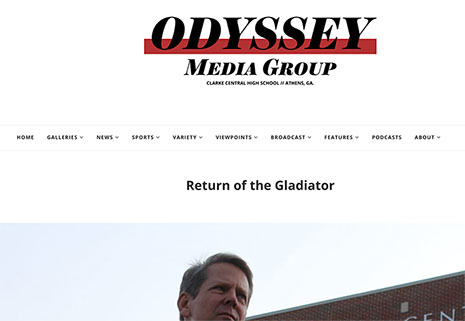 One of Alexander's proudest stories is about current Georgia Governor Brian Kemp. At the time, Georgia Secretary of State and 1982 Clarke Central High School alumnus Brian Kemp looks over the Billy Henderson Stadium during a tour of CCHS on Aug. 13.

Return of the Gladiator 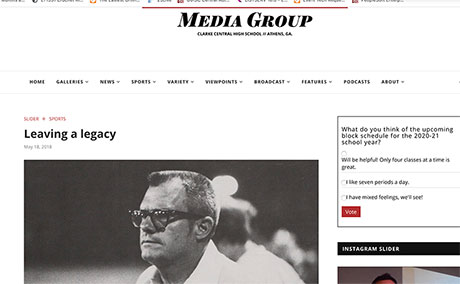 Another one of Alexander's proudest stories is about the passing of former Clarke Central High School head varsity football coach Billy Henderson.