As marketing coordinator in the Office of Undergraduate Admissions, Anna Westbury spends her days designing car decals, luggage tags, license plates and other materials she hopes will generate excitement among incoming freshmen. But growing up in Bowman, South Carolina, a town with no stoplights and a population under a thousand, she never imagined pursuing such a creative career.

“I was at a really small school, and everyone pretty much did what was expected of them,” she said. “You would finish high school, go to college, maybe be a nurse or something practical, and come home to start a family.”

Westbury took her first newspaper class in eighth grade. Shortly afterward, she began regularly attending SCSPA conferences and the Carolina Journalism Institute, where she learned to use Adobe Suite and began rethinking her goals.

“My experiences coming to SCSPA and CJI showed me a lot of people who did things that maybe were less expected or a little out of the box,” she said. “It really introduced me to the field as a whole, and it introduced me to USC as a school.

“I didn’t think I was going to stay in-state at all, but my experiences with SCSPA, SIPA and CJI had already given me a really positive picture of the university and its commitment to education.”

Magazine design was an interest Westbury cultivated through SCSPA, and she put the skills she learned to good use at Garnet & Black for nearly four years. Although she came to USC expecting to study English and apply to law school, Westbury transferred to the School of Journalism and Mass Communications, graduating in 2012 with a visual communications degree.

Since then, Westbury has stayed involved in SCSPA, leading design workshops that she hopes will be as formative for her students as they once were for her.

“It’s about showing people you can make something. You don’t have to be professional or an artist or even think of yourself as creative, but you are,” she said. “No matter what job you have, those are useful confidence skills.”

Her advice to scholastic journalists?

“Try everything,” Westbury said. “School is a safe place to try a lot of things. If you put that attitude out there, you’re gaining all these different experiences that help you know yourself better and give you a better picture of where you want to go in the future.”

Westbury sees SCSPA as an invaluable organization, especially in today’s shifting media landscape where social media outlets are both recreational and journalistic tools.

“I think students are a little overwhelmed with the amount of information they receive on a daily basis. SCSPA and SIPA help teach media discernment,” Westbury said. “Even if they’re just hanging out on Snapchat or Instagram, knowing they can use those resources to capture events as they happen gives them a voice and helps them use that voice well.” 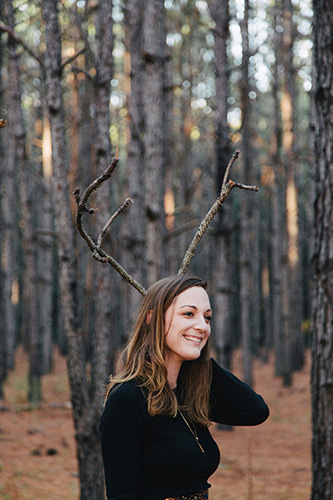 "My experiences coming to SCSPA and CJI showed me a lot of people who did things that were maybe less expected or a little out of the box. It really introduced me to the field as a whole, and it introduced me to USC as a school."