Editor's Note: The CIC is celebrating February Career Month and visual communications alumna Kerry Moore, who received the Outstanding Designer award as a senior, shares her first-person account of a recent career change.

Offer Accepted. Resignation submitted. Ready to share the most exciting news EVER.

From the early age of 2 years old, I started visiting my favorite place on the planet. When I was 9 years old, I distinctly remember thinking on our family vacation to Walt Disney World, “I would love to make this place my home — I should get a job here.”

By the time I got to St. Georges Vocational High School in Middletown, Delaware, I learned what I wanted that job to be — a Disney graphic designer. Along the way, in high school, my musical theater troupe at Premiere Center for the Arts solidified my goals by taking me on yearly trips to sing on a Disney stage, further feeding the Disney theme park addiction.

As I continued to mature, every education and career decision I made was made with the idea that I would work for Disney someday. I chose a major in visual communications at the University of South Carolina, which enabled me to be a jack-of-all-trades in graphic design, web design, photography and videography. I crafted my cognate to include hospitality and business courses ideal for the job. I transfered into the Honors College after my freshman year to better my education and be amongst like-minded driven students.

My experience with the College of Information and Communications at UofSC truly shaped me into a job candidate with all the right technical software and soft employability skills. I learned foundational knowledge in graphic design such as composition and hierarchy as well as the basics of coding and video production. I spent time with my mentor, Dr. Tara Mortensen, completing an independent study in a web design software and later leveraging her wealth of knowledge as my senior thesis director and portfolio developer. The visual communications program granted me the opportunity to step into Williams-Brice Stadium and photograph a Gamecocks football game as well as utilize the study abroad program with a trip to Italy for a travel photography course.

I interned with National Geographic (now owned by Disney) during a summer away from school and found work right out of college with Wild Dunes Resort and later the Orange County Convention Center and Apple Leisure Group — all hospitality focused for a resumé that would stand out at Disney. At these jobs I expanded my knowledge and understanding of what it means to be a designer on a marketing team, a branding team and a creative services team for a large company. I learned print production and advertising buying techniques on the job which helped to expand my communication skills by talking with vendors about our company needs. I also learned that I have a great passion for digital design, coding email advertisements, creating videos and using content management systems to update company websites. I even had the opportunity to be the project lead on implementing SMS text communications as a marketing and guest relations tool while at Wild Dunes Resort.

Some people go to New York or L.A. to pursue their dreams. I came to Orlando two years ago (almost to the day) to pursue mine. Two years and a couple of struggles later, and my dreams have come true!

Back in October, when I had a brand new job at Apple Leisure Group, I saw a position at Disney that fit me to a tee. It felt weird to apply while I was still getting to know a new job but I thought, “This is my dream and I should never stop pursuing it, ” even though I felt I had no chance of getting it!

As of Feb. 7, my new role is the digital designer for Disney Parks, Experiences and Products' Technology and Digital Internal Communications Team.

I’m most excited because this job is not only for a company I have long admired, it is also the perfect role for me. I will be doing digital and print graphic design to help tell the stories of Technology and Digital cast members through email communications, web content management, video creations, executive level presentations, flyers/posters and more.

This role is a “project hire” role, which means I have a 12-month contract. I have 12 months to learn so much about this company I love, to grow and enhance my skills, and hopefully leave enough of a mark on the company that they want me to return in some capacity after those 12 months are up. I cannot wait to get started! 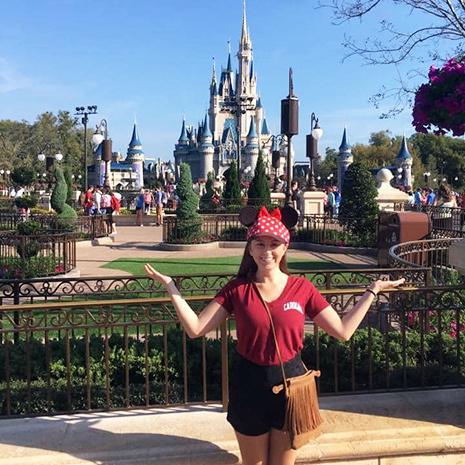