Claudia Chakamian: That’s why we do this job

Claudia Chakamian moved nearly 20 hours from Columbia to work as a sports reporter for KQDS FOX 21 in Duluth, Minnesota.

The 2018 broadcast journalism alumna is a weekend sports anchor and weekday sports reporter for the Fox affiliate. On weekends she produces the 3:30 p.m. sports block — creating the show and anchoring it. She also creates content for the station’s website.

During the week, Chakamian organizes interviews for feature segments, conducts interviews and shoots sporting events. She also assists her station’s sports director with writing, editing and shooting content for his shows.

This is Chakamian’s first employer since graduating. She began at the station as a news/sports reporter, but was promoted to doing sports full time just six months later.

Favorite part of her job

Chakamian recently did a story on two Duluth-area hockey players who were adopted from the same town in Colombia, South America. After the story aired, one of the player’s adopted fathers emailed her to tell her how much it meant to the family and how important it made them feel.

“That’s why we do this job — for those moments,” she says.

“GET INVOLVED,” Chakamian says with enthusiastic all-caps. She advises current students to get involved early with student media and the athletics department and to get internships. She credits her time as sports editor of The Daily Gamecock and sports producer of Capital City Sports (Student Gamecock Television) as giving her the skills needed for her current role.

She also says the Carolina News & Reporter  senior semester for broadcast majors greatly prepared her for the real world.

Most valued takeaways from her time at South Carolina

Chakamian says she is thankful for all of the hands-on opportunities she had as a student journalist.

“I had the chance to interview professional athletes, cover multiple NCAA tournaments and work alongside some pretty incredible and accomplished sports journalists,” she says.

She also values the instructional time she had with professors Kevin Hull, Greg Brannon and Rick Peterson, as well as former professor Miles Romney. She says each of these professors took time to talk to her, one-on-one and in the classroom, and provided her with advice and guidance.

“The opportunities at South Carolina will help prepare you in the best way possible, and the professors will still be there to help you even when you’re off in the real world,” she says.

Chakamian is always open to talking to aspiring journalists.

Summer Huechtker is a broadcast journalism major from Rock Hill, South Carolina. Currently in senior semester, she hopes to someday work as a sports reporter for a professional team.

Photos of Claudia at work. 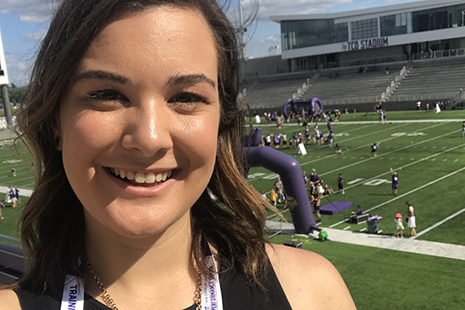