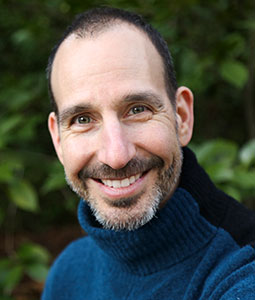 André Megerdichian has been performing professionally for over two decades with such companies and choreographers as the  Limón Dance Company, Janis Brenner and Dancers, The Mary Anthony Dance Theatre, Soundance Repertory Company, Reidel Dance Theatre, Daniel Charon, and Seán Curran.

For seven seasons he was a principal dancer with Dance Kaleidoscope, under the artistic direction of David Hochoy, former rehearsal director of the Martha Graham Dance Company. During his time in Indiana, André was awarded the Creative Renewal Arts Fellowship by the Indianapolis Arts Council, for his sustained artistic contributions to the community.

André has served as a faculty member at the Duncan Center Conservatory in Prague Czech, Republic, The Limón Institute in New York City, the University of Cincinnati College-Conservatory of Music, Case-Western Reserve University, University of Wyoming, and Jacksonville University. He has taught master classes and workshops throughout the United States, and internationally at such institutions as the Xing Hai Conservatory of Music, Institutes of the Arts Barcelona, The Beijing Dance Academy, Pole D’Enseignement Superior Music/Dance of Bordeaux, France, and as a Master Teacher for the 3rd Annual Beijing International Ballet and Choreography Competition.

His work has been commissioned by numerous Universities, festivals, and dance institutions throughout the United States, including Dance Kaleidoscope, The Cincinnati Ballet (CB II), the Next Dance Company, Cincinnati Chamber Orchestra, and the Oregon Shakespeare Festival Daedalus Project. Internationally, André collaborated with Czech physical theatre director Petr Hudecek and co-choreographer / performer Jennifer Deckert, in the creation of the evening length duet, Kiss Romeo Bang! Juliet, which premiered at the Alta Theatre in Prague, Czech Republic, choreographed for the Opening Ceremony of the Corpus Christi Annual Commemorative Run, presented by Prague Castle and presided over by the Arch Bishop of Prague. He was also commissioned by the Painted Lights Dance Project to create Moving Light, an evening length work premiered at the Statkino Theatre in Salzburg, Austria.

With composer Fahad Siadat, André founded The Resonance Collective - an interdisciplinary project-based company cross-pollinating the aesthetic, formalistic, creative, and performative aspects of multiple genres. Since then, they have created 3 evening length works; Saharava-a ritualized dance-opera, The Moon Has Made Us Brothers, and 13 Ways of Looking at a Blackbird, in addition to works for such institutions as the New York International Fringe Festival, the Xing Hai Conservatory of Music Dance Ensemble, California Institute of the Arts, the Monmouth University Pollak Gallery with visual artist Lucy Kalian, along with performances throughout the NYC area.

André is a Functional Range Conditioning movement specialist (FRCms), certified yoga instructor, CPT through the National Academy of Sports Medicine, and has presented research in dance science for the International Association for Dance Medicine and Science conferences.

Raised in Beirut Lebanon, Athens Greece, and Geneva Switzerland, André started dancing during his senior year at Fishburne Military School and holds a BFA from Butler University, and an MFA in Choreography from the California Institute of the Arts.