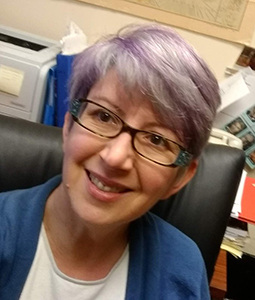 Professor Harrison regularly teaches the survey of European history, women in modern Europe, the Enlightenment and the French Revolution. She also teaches graduate seminars on feminist theory and methodology.  Her first book, The Bourgeois Citizen in Nineteenth-Century France: Gender, Sociability, and the Uses of Emulation, explored the formation of a male bourgeois elite in provincial France. Her second book, Romantic Catholics: France's Postrevolutionary Generation in Search of a Modern Faith examines how lay French women, men, and children practiced their faith, aspiring to create a revitalized Catholicism that could reconcile itself with revolutionary political principles.

I am currently writing a transnational history of the Zouave uniform with my colleague Thomas J. Brown.  Originating in French colonial Algeria, the uniform with its baggy trousers and open jacket became a mid-nineteenth-century fad. The volunteers who defended Papal Rome, both sides of the US Civil War, the British West Indies Regiment, the guardsmen of the last king of Hawaii, Polish insurgents against Russian rule, and free black Brazilian units in the war against Paraguay all wore the look. Simultaneously, Zouave performances featuring human pyramids, precision rifle maneuvers, and plots that turned on cross-dressing sold out theatres in Europe and the US.  Some of these Zouave performers were veterans of military units, but many were women, and by the 1870s the Zouave stage featured such mash-ups as Chinese and Native American Zouave troupes.  Being a Zouave meant embracing ethnic, racial, and gender crossing and liberating oneself from the strictures of bourgeois society.

I am also working on a book project, Women, Rome, and Catholic Cosmopolitanism in the Nineteenth Century, which examines the most important alternative to the nation-state in the nineteenth century – the Roman Catholic Church – and its relationship to women, who were excluded from national citizenship.  It is a transnational study, focusing on individual Catholic women from four countries at different stages of nation formation: the British artist Maria Rosina Giberne, the French author Pauline La Ferronnays Craven, the Bavarian historian Charlotte von Leyden Blennerhassett, and the American journalist Emilie Meriman Loyson.  I emphasize the cosmopolitanism of these women’s lives and identities by focusing on their residence in Rome, a city contested between the church and the emerging Italian state during the Risorgimento.  Their careers suggest that in cosmopolitan Catholicism, these women found a desirable alternative to the rights of citizens that modern states denied them.

I am also co-editor, with Kathryn Edwards, of French Historical Studies.