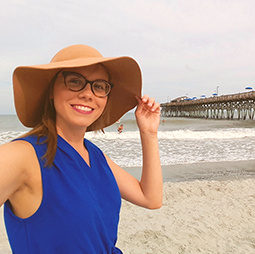 Bio: I am a fourth-year doctoral candidate in U.S. history focusing on women and gender studies, Cold War history, and national security studies. I hold bachelor’s degrees in History / Intelligence and National Security Studies from Coastal Carolina University. In May of 2021, I received my master’s in Public History with a concentration in historic preservation from the University of South Carolina. My MA thesis titled, “Foxy Ladies and Badass Super Agents: Legacies of 1970s Blaxploitation Heroines,” examined cultural perceptions and depictions of women in the intelligence and national security field through film, particularly African American women. This thesis was refined into a journal article which is now under final revisions for publication with the Journal of Popular Culture and was a winner of the William E. Brigman Award for the Outstanding Graduate Student Paper presented at the 2021 national Popular Culture Association/American Culture Association Conference. Currently, I’m in the process of writing my dissertation which examines women’s involvement in the U.S. intelligence community as operatives and analysts during the late Cold War period, the contributions of their work, and how gender diversity impacts national security decision making post-9/11.

Over the past few years, I have also been incredibly involved with public history initiatives and projects throughout South Carolina, writing several reports and National Register Nominations as well as co-authored a book titled, Willful Spirits: Providing Higher Education for the Sons and Daughters of Horry County, which documented the history of higher education in Horry County, South Carolina. I’ve co-authored a report for the South Carolina State Park Program titled, A Layered History: Interpreting Cultural Resources at Sesquicentennial State Park, which documented the Sesquicentennial State Park’s history and made recommendations that are currently being undertaken by park management. I also prepared a National Register Nomination on the Sandy Island School House, a former African American school prior to desegregation in South Carolina, in Georgetown County. My other National Register Nomination is on Ruth's Beauty Parlor in Richland County which was a Black beauty parlor that served as a place of sanctuary and Civil Rights activism in the state prior to desegregation. Recently, I have worked for the SC State Department of Archives and History in collaboration with the African American Heritage Commission and WeGOJA Foundation to document, survey, and preserve dozens of Green Book sites and others associated with African American history in the state.

I have also recently presented my work on virtual reality and historic preservation at the 2020 National Council on Public History Conference and was one of five recipients nationally of their Student Travel Award. I’m also in the process of leading and speaking on a panel titled, “Silent Spaces and Reimagined Places: Using Collective Imagination to Address the Challenges in Preserving and Interpreting Histories of Race, Gender, and Sexuality,” for the 2021 American Association for State and Local History Conference. I have also received accolades from University of South Carolina including the Wilfrid and Rebecca Callcott Award for excellence in historical study; the Darrick Hart Award for Excellence in Public History recognizing outstanding contributions made by a graduate student to the field of public history; And the USC Award for Excellence in Teaching Assistantship for demonstrating a strong record in teaching. When I am not writing, researching, or teaching, I spend my time traveling and having fun with friends, family, and a pug named Otis.