J.D. knew he wanted to pursue a career in health care. At UofSC, he’s joined researchers leading the fight against cancer.

Sophomore public health and Spanish major Jared “J.D.” Dawson has gained more than research experience during his short time at South Carolina. The Greenville, South Carolina native has used his Magellan Apprentice Research Grant to study a specific type of bacterial stomach cancer in the hopes of someday developing antibiotic treatments that could replace chemotherapy.

“Being selected to receive a research grant was a great honor, and it showed that UofSC wanted to support my dreams and academic interests,” said J.D. “In the spring, I began a project called ‘Identification and Characterization of Bacteria from Human Peritoneal Tumors' where I conducted antibiotic tests on specific strains of bacteria found in different stomach cancer cell lines. By seeing which antibiotics effectively reduced bacteria growth, our lab is better able to understand which could potentially be used in cancer treatment.”

J.D.’s research will play a major role in increasing the medical community’s understanding of alternative stomach cancer treatments. And while the lab is an important place to advance scientific knowledge, J.D. wants to further his goal of providing holistic health care to communities.

J.D.'s Capstone advisor connected him to AMIGOS, a student organization that places volunteers in Columbia-area medical clinics. Using his medical knowledge and Spanish language skills, J.D. was able to work as a translator during patient intake.

“I’ve developed a deep passion for the Hispanic community and the health care it receives. It actually made me want to shift my focus from solely on medicine to public health and solving health disparities.”

At a large university, it’s easier to get involved when you have ‘plug-ins’ for resources. For me, the Capstone Scholars program did just that. The program has provided everything I’ve needed, from improving my Spanish and securing clinical hours, to finding leadership and travel opportunities.

“The Passport Travel Grant is offered through the Study Abroad Office. I believe I can learn a lot about cultural competency and apply that to my future career in health care. I think it’s important to continue to expose myself to different cultures and opportunities, and my time at South Carolina has made that possible.”

I am South Carolina. 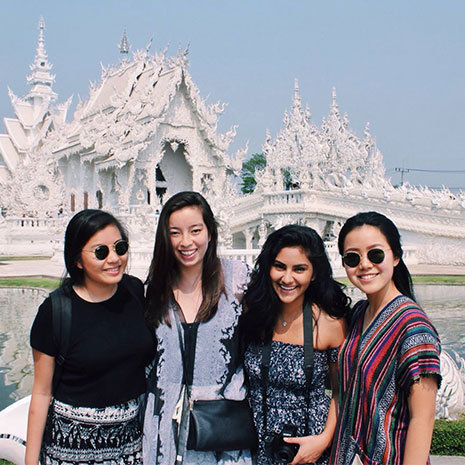 The Capstone Scholars Program provides a unique blend of learning and living experiences. It takes students on a personal journey of self-discovery while providing academic and social opportunities.